What is buffering and spooling in a batch processing operating system?

To improve the performance and to avoid the CPU idle time the operating system uses two approaches which are explained below in detail.

It is a method of overlapping input, output and processing of a single job.

Since the CPU is faster than the input /output device the speed of execution is controlled by the I/O device not by the speed of the CPU.

It is called simultaneous peripheral operation online. Simultaneous means if two or more users issue the print command and the printer can accept requests even if it is printing some other jobs.

Similarly, when the job requests the printer to output a line, that line is copied into a system buffer and is written to the disk. Whenever the job is completed, the output is printed. This form of processing is called spooling.

Spooling is mainly used for data processing at remote sites. It overlaps the I/O of one job with the computation of other jobs. Spooling can keep both the CPU and I/O devices watching at much higher rates.

The figure given below depicts the spooling approach − 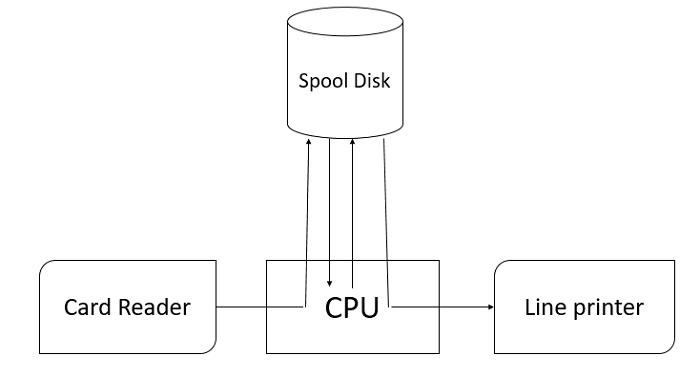