What are the types of Transmission Technology?

The transmission technologies are divided into two types −

Let us begin by learning about broadcast networks.

Transmitting data from one source host to all other hosts present in the same or other network is called broadcast. It is called a one to all transmission.

Broadcast is classified into two types, which are as follows − 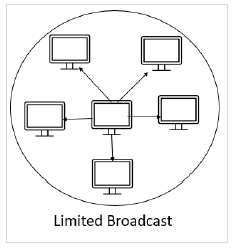 In Limited Broad casting if the destination address is 255.255.255.255 then the packet will be sent to all the hosts in the network.

Transmitting data from source host to all other hosts present in different networks then it is called as direct broadcast. Given below is the diagram of direct broadcast − In direct broadcast Host ID bits are all set to 1, Network ID is the IP address where all destination hosts are present.

For example: Source IP address is 12.34.5.6 sending data to all other nodes present at different network having IP address 24.0.0.0

Point-to-point networking is also called point-to-point protocol (PPP). Point to point is a data link layer which is layer 2 communication protocol. It is present between two routers without any host or any networking layers in between

It also provides properties like connection, authentication, transmission, encryption and the data compression. It is used over many physical layers like serial cables, phone lines, and radio links.

Point to Point Protocol is widely used by ISPs that are Internet Service Providers to provide dial up connections to their internet. It mainly facilitates the transmission of data packets between the point to point links.

The importance of using PPP is to provide serial connections that are to provide internet connections. Given below is the diagram of point to point network −