What are the different components and architectures of firewalls?

Firewall in general is defined as a wall between personal computer and outside world. So it will filter the traffic coming from the outside world based on the user configuration like which sites are trusted sites and which we need to allow.

Example of firewall system design is shown below − 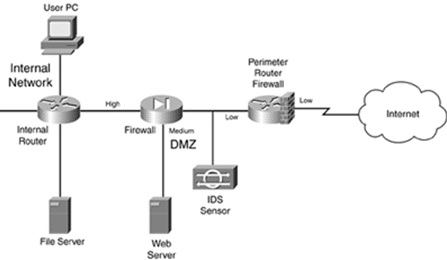 Components of a Firewall System

The components of firewall system are explained below −

It is used to provide a link to the public networking system like the internet, or a distinctive organization. It performs the routing of data packets with the help of an appropriate routing protocol. It also provides the filtering of packets and addresses translations.

The provision of distinctive levels of security and supervises traffic among each level. Most of the firewalls are present near the router that provides security from external threats, but sometimes the firewall is present in the internal network to protect from internal attacks.

Its function is to provide a secure connection among two machines or networks. It consists of encryption, authentication, and packet-reliability assurance. It provides the secure remote access of the network, thereafter connecting two WAN networks on the same platform while not being physically connected.

It is used to identify, investigate, and resolve unauthorized attacks. A hacker can attack the network in various ways. It can execute a denial-of-service (DoS) attack or an attack from the backside of the network through some unauthorized access. An IDS solution should be smart enough to deal with these types of attacks.

The internet provides a two-way flow of traffic that may be undesirable in many organizations where some information may concern exclusively the organization or for the internet.

Internet is a TCP/IP network that is modelled after the internet that only works within the organizations to delineate information meant only for the benefit of organization to its internet and other open to all or meant for internet, some sorts of security measures need to be employed to control two-way flow of traffic.

There are three types of firewall architectures which are as follows −