What are the differences between EIGRP and BGP?

Let us understand the concepts of Enhanced Interior Gateway Routing Protocol (EIGRP) and Border Gateway Protocol (BGP) before learning the differences between them.

It is the enhanced version of IGRP protocol. It consists of all the features which IGRP does and also supports some ad-on's.

To overcome the drawbacks of IGRP i.e like slow rate of convergence, hop limitation, no support to VLSM etc and IGRP is the successor of RIP which removes the hurdles caused by RIP routing technique.

We all know that IGRP works or supports many protocols other than IP unlike RIP. The same fashion is employed in EIGRP too. The main drawback which EIGRP has overcome is its support for Variable length Subnet Masking (VLSM).

One more advantage of having EIGRP is it consists of a topology table which consists of the information of the paths from one router to another (shortest path). The shortest path is calculated using the Diffusing Update Algorithm i.e DUAL.

For example let us consider that we are sending a packet of information from point A to D as shown in the below figure. 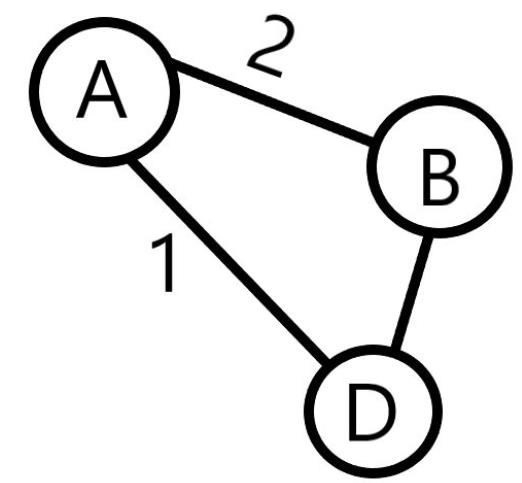 Here it consists of two paths i.e (A to D) and (A to B and the B to D).Here in EIGRP using DUAL it tracks the neighbouring routes and selects the best which is short and loop-free. The DUAL will be helpful when many routers are involved.

The features of EIGRP are as follows −

It can be defined as a standardized exterior gateway protocol which is developed to interchange routing information and reachability information between various autonomous systems (AS) on the Internet. It is classified as a path vector protocol as well as a distance-vector routing protocol.

It is used for exchanging routing information.This protocol will connect any interwork of an autonomous system. It works while one network router would get connected with that of the other ones.

This would have all the peering partners which the router would send in the traffic to that of the router which has a close destination of the data.

The characteristics of BGP are as follows −

The functionalities of BGP are as follows −