What are amphibious fishes? Can they live outside water?

The fishes that can survive without water for a good amount of time are known as amphibious fishes. Convergent evolution plays an important role in these species, as the next generation species receives analogous structures that have similar function but were not present in the last generation.

Many fishes are amphibious, which means they can naturally survive out of the water. These fishes have developed limbs or use lateral undulation (that is, wave-like movement patterns that act to propel an animal forward) for terrestrial locomotion. They leave water bodies for many reasons like escaping predators, low oxygen environments etc.

Ancient fish had lung-like organs, which were the ancestors of tetrapods (four-limbed vertebrates). Later, these fishes evolved their lung-like organs into swim bladders as they help control buoyancy.

As the lungs are no longer present in the new recent generation of amphibious fishes, they use their skin or gills to breathe air. Their eyes have also been adapted to the variation of densities between water and air, enabling them to see clearly in both air and water. 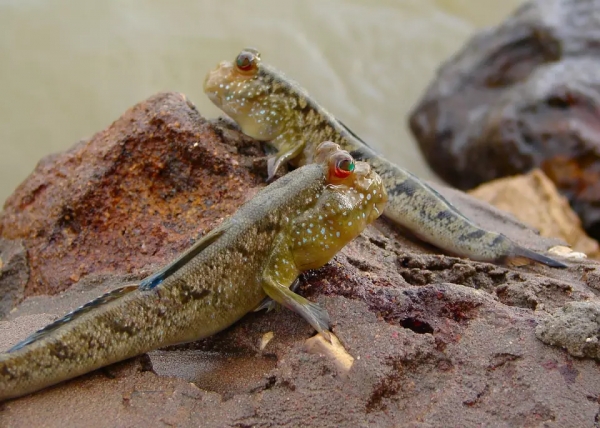 They are the type which has lung-like organs for respiration. Their fins are shaped like limbs. If enough air is not available they will drown. When a water body dries up, few species bury themselves in the ground and can stay for at least a year till the water comes back.