If, you are a social media lover and always want to dip your head inside the social networking sites in limited bandwidth, here is the solution.

Mobile app “Vine”, a short video capturing app, developed by microblogging website Twitter, facilitates users to record, edit and share six to seven second long video clips. These recorded videos can be uploaded through Vine’s social network and can be shared on many Facebook, Twitter, LinkdIn, etc… Vine also keeps group of videos posted by other with theme and trending videos. 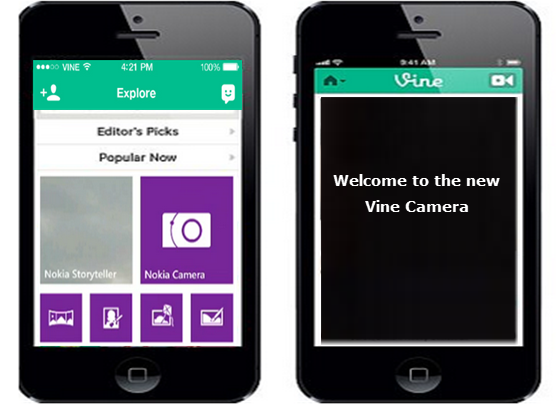 Vine is very popular among users who really like to share their stuffs to many followers through video. Due to its popularity and need, Vine introduced a new camera, its powerful features facilitate users to upload, edit and share their videos, also facilitates users to import present videos on the phone and fit them into Vine.

It is not just a front and rear facing camera, also facilitates you to import existing videos (import one video or group of videos together) from your phone.

Earlier, Twitter required users to film new content directly within the video sharing app using Vine’s once-unique hold-to-record feature. Now, Vine users can import their selected (single video or group of videos together) video from phone or downloaded videos from friends or Dropbox. This import option you can see on bottom left corner on the capture screen. You can also import slow-motion videos from your iPhone. Its preview and undo button facilitates users to see the last clip you added earlier and if you don’t like that clip, you can undo it by using undo button. These two features, import and undo are also there in Instagram video.

If you’re looking for more options, just click the wrench from the capture screen facilitates you to access a second layer of camera tools: grid, plus a new level; the focus lock that works with the front-facing camera in addition to the rear-facing camera; ghost mode that displays last frame of your previous shot and a new torch feature works in low-light settings.

The aim of Vine is to facilities users easily create, share and discover short, looping videos.

Today, people not only use Vine on mobile app also on Vines.com (on Twitter and Facebook). Right now, every month more than 100 million people watch Vines through the web and more than 1 billion people every day watch Vine.

Now, Vine is leading in the market and become a great tool for short video creation, edition, and sharing. It is in the top in the social market. People like this because it is fast and easy to use and its new camera features are very much liked by users.