BTS and MS are connected through radio links and this air interface is called the Um. A radio wave is subject to attenuation, reflection, Doppler shift, and interference from other transmitter. These effects cause loss of signal strength and distortion which impacts the quality of voice or data. To cope with the harsh conditions, GSM makes use of an efficient and protective signal processing. Proper cellular design must ensure that sufficient radio coverage is provided in the area.

Rayleigh Fading or Macroscopic Variations can be modeled as the addition of two components that make up the path loss between the mobile and the base station. The first component is the deterministic component (L) that adds loss to the signal strength as the distance (R) increases between the base and the mobile. This component can be written as −

Microscopic Variations or Rayleigh Fading occurs as the mobile moves over short distances compared to the distance between mobile and base. These short term variations are caused by signal scattering in the vicinity of the mobile unit say by a hill, a building, or traffic. This leads to many different paths that are followed between the transmitter and the receiver (Multipath Propagation). The reflected wave is altered in both phase and amplitude. The signal may effectively disappear if the reflected wave is 180 degree out of phase with the direct path signal. The partial out of phase relationships among multiple received signal produce smaller reduction in received signal strength.

Reflection and multipath propagation can cause positive and negative effects.

There are two major processes involved in transmitting and receiving information over a digital radio link, coding, and modulation.

Multipath propagation allows radio signals to reach behind hills and buildings and into tunnels. Constructive and destructive interference signals received through multi paths may add together or destroy each other.

Coding is the information processing that involves preparing the basic data signals so that they are protected and put in a form that the radio link can handle. Generally the coding process includes the Logical EXclusive OR (EXOR). Coding is included in −

Human speech is band limited between 300Hz to 3400Hz and undergoes Frequency Modulation in analog systems. In digital fixed PSTN systems band limited speech is sampled at the rate of 8KHz and each sampled is encoded into 8 bits leading to 64Kbps (PCM A-Law of encoding). Digital cellular radio cannot handle the high bit rate used for PSTN systems. Smart techniques for signal analysis and processing have been developed for reduction of the bit rate.

Human speech can be distinguished in elementary sounds (Phonemes). Depending on the language, there are 30 to 50 different phonemes. The human voice is able to produce up to 10 phonemes per second, so that about 60 bit/s are required to transfer the speech. However, all individual features and intonations would disappear. To preserve the individual features, the real amount of information to be sent is a number of times higher, but still a fraction of the 64 Kbit/s used for PCM.

Based upon the phoneme production mechanism of the human organs of speech, a simple speech production model can be made. It appears that during a short time interval of 10-30 ms, the model parameters like pitch-period, voiced/unvoiced, amplification gain, and filter parameters remain about stationary (quasi stationary). The advantage of such a model is the simple determination of the parameters by means of linear prediction.

There are 3 classes of speech coding techniques

The 64kbits/s PCM transcoded from the standard A-law quantized 8bits per sample into a linearly quantized 13bits per sample bit stream that correspond to a 104kbits/s bit rate. The 104kbits/s stream is fed into the RPE-LTP speech encoder which takes the 13 bits samples in a block of 160 samples (every 20ms). RPE-LTP encoder produces 260bits in every 20 ms, resulting in a bit rate of 13kbits/s. This provides a speech quality acceptable for mobile telephony and comparable with wireline PSTN phones. In GSM 13Kbps speech coding is called full rate coders. Alternatively half rate coders (6.5Kbps) are also available to enhance the capacity.

The channel coder provides 456 bits for every 20ms of speech. These are interleaved, forming eight blocks of 57 bits each, as shown in figure below. 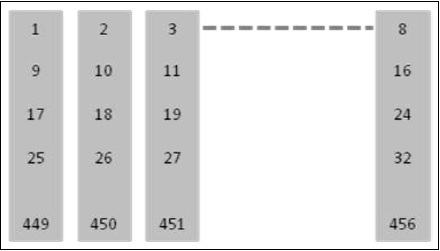 In a normal burst to blocks of 57 bits can be accommodated and if 1 such burst is lost there is a 25% BER for the entire 20ms.

A Second level of interleaving has been introduced to further reduce the possible BER to 12.5%. Instead of sending two blocks of 57 bits from the same 20 ms of speech within one burst, a block from one 20ms and a block from next sample of 20ms are sent together. A delay is introduced in the system when the MS must wait for the next 20ms of speech. However, the system can now afford to lose a whole burst, out of the eight, as the loss is only 12.5% of the total bits from each 20ms speech frame. 12.5% is the maximum loss level that a channel decoder can correct. The purpose of Ciphering is to encode the burst so that it may not be interpreted by any other devices than the receiver. The Ciphering algorithm in GSM is called the A5 algorithm. It does not add bits to the burst, meaning that the input and output to the Ciphering process is the same as the input: 456 bits per 20ms. Details about Encryption are available under the special features of GSM.

Every transmission from mobile/BTS must include some extra information along with basic data. In GSM, a total of 136 bits per block of 20ms are added bringing the overall total to 592 bits. A guard period of 33 bits is also added bringing 625 bits per 20ms.

Modulation is the processing that involves the physical preparation of the signal so that the information can be transported on an RF carrier. GSM uses Gaussian Minimum Shift Keying technique (GMSK). Carrier frequency is shifted by +/- B/4, where B=Bit rate. However using the Gaussian filter, reduces the bandwidth to 0.3 instead of 0.5.

Since the air interface is vulnerable to fraudulent access, it is necessary to employ the authentication before extending the services to a subscriber. Authentication is built around the following notions.

These parameters (named an authentication triplet) are generated by the AUC at the request of the HLR to which the subscriber belongs. The algorithms A3 and A8, are defined by the PLMN operator and are executed by the SIM. Data is encrypted at the transmitter side in blocks of 114 bits by taking 114-bit plain text data bursts and performing an EXOR (Exclusive OR) logical function operation with a 114-bit cipher block.

The decryption function at the receiver side is performed by taking the encrypted data block of 114 bits and going through the same "exclusive OR" operation using the same 114-bit cipher block that was used at the transmitter. 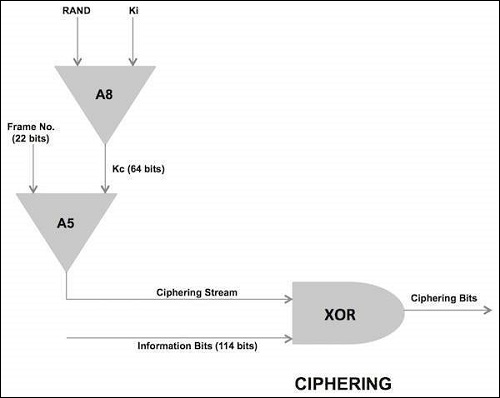 The cipher block used by both ends of transmission path for a given transmission direction is produced at the BSS and MS by an encryption algorithm called A5. The A5 algorithm uses a 64-bit cipher key (Kc), produced during the authentication process during call setup and the 22-bit TDMA frame number (COUNT) which takes decimal values from 0 through 2715647, and has a repetition time of 3.48 hours (hyper frame interval).The A5 algorithm actually produce two cipher blocks during each TDMA period. One path for the uplink path and the other for the downlink path.

Timing Advance is the process of transmitting the burst to the BTS (the timing advance) early, to compensate for the propagation delay.

Why is it Needed?

It is required because of the time division multiplexing scheme used on the radio path. The BTS receives signals from different mobile stations very close to each other. However when a mobile station is far from the BTS, the BTS must deal with the propagation delay. It is essential that the burst received at the BTS fits correctly into time slot. Otherwise the bursts from the mobile stations using adjacent time slots could overlap, resulting in a poor transmission or even in loss of communication.