UMTS is designed to interoperate with GSM networks. To protect GSM networks against man-in-middle attacks, 3GPP is considering to add a structure RAND authentication challenge. 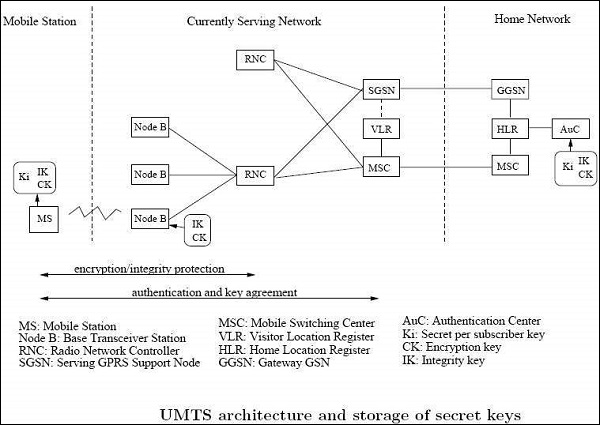 Both the network and the mobile station supports all the security mechanisms of UMTS. Authentication and Key agreement is as follows −

UMTS Subscriber to GSM Base Station

The mobile unit (subscriber UMTS) supports both USIM and SIM application. The base station system uses GSM while the VLR / MSC technology components are respectively the UMTS SGSN. The mobile station and the core network both support all security mechanisms of UMTS. However, the base station system GSM (BSS) does not support the protection of the integrity and uses the GSM encryption algorithms. The first eight steps of the authentication protocol are performed as in the classical case. GSM BSS simply forwards the UMTS authentication traffic.