At the time when the subject is found in focus, the distance between the image sensor and the lens is considered the focal length of the lens. This concept is a crucial one as it helps to determine the nature of the mirror because it helps to understand the divergence and convergence of the light inside an optical system. In the cases where the focal length of the mirror is found to be positive, converge of light is found as well.

This experiment is conducted with the intention of finding the value of v in accordance with different values of u for the determination of the focal length of a concave mirror.

In order to conduct this particular experiment with a concave mirror, the things that have requirements are followers:

The main apparatus that is required for this experiment of physics is an optical bench that has three uprights including zero end upright and two outer upright along with lateral movement (Sciencedirect, 2022). Apart from this, the other apparatuses are a concave mirror, mirror holder, a half meter rod, two optical needles and a knitting needle. 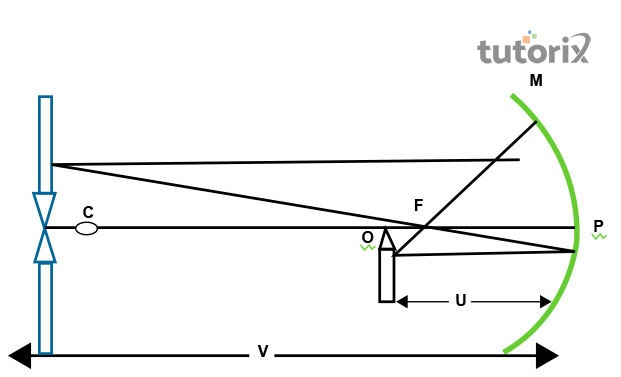 The above figure represents the proper set-up of the experiment that is necessary for performing such kind of experiment in an accurate manner (Duan et al. 2018). In order to find the distance between mirror and image, the focal length is used. In the above figure, the focal length is addressed with the letter F, based on which the relationship that has been found between the distance of object and the distance of image can be represented as 1/f = 1/u + 1/v. In this mathematical representation V and U stands for distance of image of the needle and distance o object needle respectively. Now, according to the mirror formula, the value of f will be equivalent to uv/u+v.

The mirror beads are to be placed facing a distant building or tree which will help to get the image of the building or the tree on the white painted wall. Moving the mirror forward and backward will help to get a clearer image (Steven, Bentley & Dubra, 2019). Now, the measurement of the distance between image and wall will be found equal to the rough focal length of the concave mirror.

Procedure to set mirror and needle

In the fixed upright near-zero mark of the optical bench, the mirror holder needs to be fixed. The object needle will be marked as o and the image needle will be marked as I that is placed far away (Barone et al. 2018). To get a different reading of the focal length, the distance of the object needle is required to change frequently. The formal record will be taken in a tabular form.

A half-meter rod is taken in order to measure the knitting needle which is identified by the letter x. The knitting needle needs to be held in such a way that one end will touch the central part of the mirror (Mirzoyan et al. 2019). The other part will touch the tip of the object needle. Mathematically the formula will be derived like U = x - y and v = x - y. 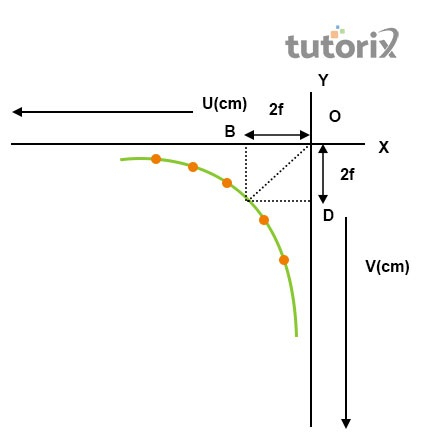 Figure 2: The graph between u and v

In accordance with the formula of the mirror where it has been observed that v=u, then the focal length of the mirror will be found at the point A. therefore, the mean focal will be represented with the unit of centimetres. 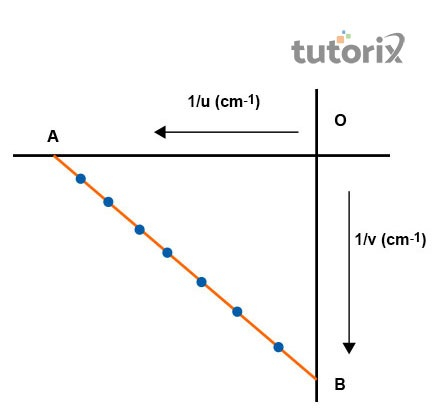 The main result will be showcasing that the calculated focal length will be equivalent to uv/u + v which will be represented in the unit of centimetres. For conducting such experiments the important precautions one needs to maintain are as follows:

The upright needs to be in the vertical direction and for the index correction, the application of u and v is a must.

The present tutorial has been aimed to explain an experiment that is conducted in order to find the value of V for different values of U for the determination of the focal length of a concave mirror. The tutorial has included the theory and diagram section along with the calculation where the mathematical representation of the mirror formula has been followed for the representation of the calculation of this experiment. In addition, the tutorial has further included procedures individually for determining rough focal length, for the correction of index and to set mirror and needle.

Q1.What is the mirror formula?

Q2. What is the optical centre of the lens?

Ans. The optical centre of the lens is the particular point identified at a fixed position inside the lens on the principal axis where the rays of light passes through.

Q3. What is the principal axis of the lens?

Ans. At the point where a straight line of light passes through, the central part of the curvature of the lens is defined as the principal axis of the lens or mirror.

Q4. What is the difference between concave and convex mirrors?

Ans. The mirror that is able to create a visible reflection of the object will be considered a convex mirror. On the contrary, the mirror that creates the image which is not clearly visible will be identified as a concave mirror.