In wireless LANs ( wireless local area networks), the hidden terminal problem is a transmission problem that arises when two or more stations who are out of range of each other transmit simultaneously to a common recipient. This is prevalent in decentralised systems where there aren’t any entity for controlling transmissions. This occurs when a station is visible from a wireless access point (AP), but is hidden from other stations that communicate with the AP.

Suppose that there are three stations labelled STA, STB, and STC, where STA and STC are transmitting while STB is receiving. The stations are in a configuration such that the two transmitters STA and STC are not in the radio range of each other. This is shown in the following figure − 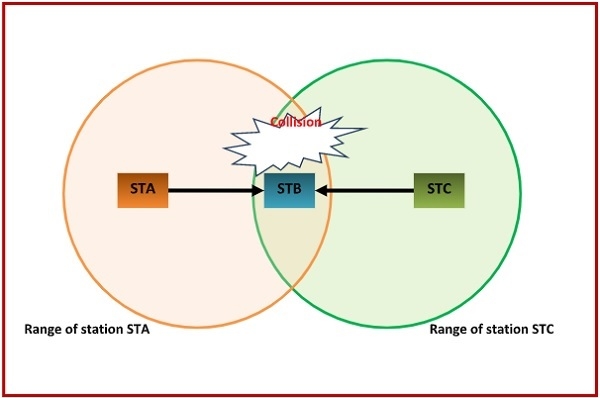 The exposed terminal problem is solved by the MAC (medium access control) layer protocol IEEE 802.11 RTS/CTS, with the condition that the stations are synchronized and frame sizes and data speed are the same. RTS stands for Request to Send and CTS stands for Clear to Send.

In the above example, station STC hears does not hear RTS from station STA, but hears CTS frame from station STB. So, it understands that STB is busy defers its transmission thus avoiding collision.