Adaptive Tree Walk Protocol is a technique for transmitting data over shared channels that combines the advantages of collision based protocols and collision free protocols.

In computer networks, when more than one station tries to transmit simultaneously via a shared channel, the transmitted data is garbled, an event called collision. In collision based protocols like ALOHA, all stations are permitted to transmit a frame without trying to detect whether the transmission channel is idle or busy. This works very good under light loads. Under heavy loads, collision free protocols are suitable, since channel access is resolved in the contention period that eliminates the possibilities of collisions.

In adaptive tree walk protocol, the stationed are partitioned into groups in a hierarchical manner. The contention period is divided into discrete time slots, and for each slot the contention rights of the stations are limited. Under light loads, all the stations can participate for contention each slot like ALOHA. However, under heavy loads, only a group can try for a given slot.

In adaptive tree walk protocol, the stations or nodes are arranged in the form of a binary tree as shown in the diagram. Here, the internal nodes (marked from 0 to 6) represent the groups while the leaf nodes (marked A to H) are the stations contending for network access. 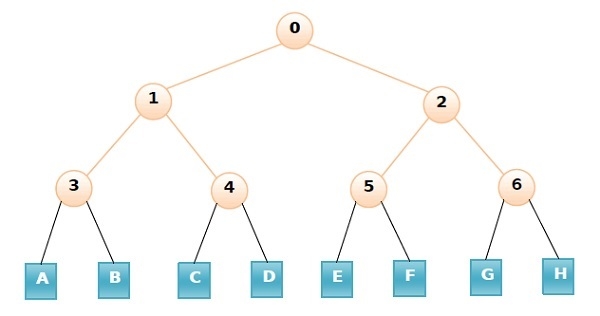 Initially all nodes (A, B ……. G, H) are permitted to compete for the channel. If a node is successful in acquiring the channel, it transmits its frame. In case of collision, the nodes are divided into two groups −

However, if there is a collision, then the stations are further divided into groups as follows −

In order to locate the contending stations, depth-first search algorithm is used. The same principle of contention is applied, only for those groups that has some contending stations. The division continues if collisions occur, until each group contains only 1 node.