The 51% attack refers to an attack on the block chain network, deceiving the miners with a duplicate block chain which has more than 50% acceptance and spending the same bitcoins again.

To put it in simple words, a single miner or a pool of miners controlling more than 50 (say 51%) of the cryptocurrency network’s mining hash power, can attack the block chain network and reverse the transactions. Once they have more than 50% of hashing power they can take control of the cryptocurrency network and they could double spend the coins.

However, by controlling the majority of computing power on the network, a single miner or a pool of miners can interrupt the block chain integrity and can do a fraud. Not only that, they can monopolize and prevent other miners from creating new blocks. 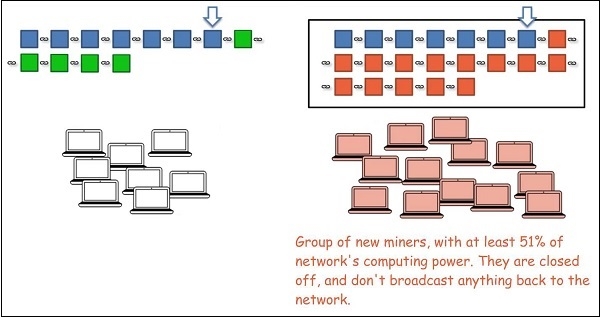 How does it work

Before we find out how does this work, let us understand few facts about these crypto currency networks −

Once you understand the facts above, I will discuss how does the 51% attack works.

Let us say, I have more hashing power, above 50% hashing power when entire miners are put together, I will start creating block after block and create my own private block chain. Meanwhile I will spend the Bitcoins with me to buy a luxurious car, private jet or a house. I will announce my transactions on the public block chain and everybody will have a copy of that transactions.

As I have not mentioned my bitcoin transactions in my own block chain, they are shown as un spent on the new block chain. Now I can spend them again. This way I can double spend my bitcoins. Hope you understood the concept now.

Until the time this has really happened, people thought this is a hypothetical theory. There have been instances like Ghash.io, a mining pool has briefly exceeded 50% of total Bitcoin network’s computing power in 2014, and they have voluntarily reduced their share of network and slowed down.

In 2018, there has been a 51% attack on the Bitcoin Gold, where the attackers have stolen $18 million worth of Bitcoin Gold.