Modem is an abbreviation of “modulator demodulator”. It is a network device that modulates digital information or bits into analog signals for transmission at the sending end, and demodulates the analog signals to bits at the receiving end. Telephone modems enables data communication between two computers over voice – grade telephone lines.

The computers are digital devices that are connected via analog local loops of the telephone networks. So, there is a need to convert the bits to analog signals so that they can be transmitted via the physical channels; and conversely convert analog signals in the local loops to computer understandable bits. So a modem is placed at the interface of computer and local loop. 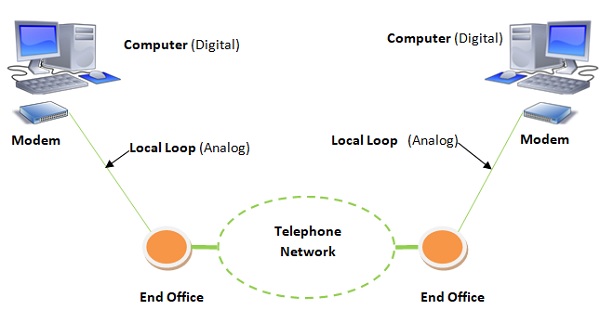 Data communication speed over telephone lines are restricted by bandwidth. So, Trellis Coded Modulation (TCM) is being popularly used to enhance speed as well as reduce transmission errors.

ITU-T defines a set of standards and specifications for modems for sending data across telephone lines. Some of the popular standards are −