Billing is the aggregation of all non-recurring, periodic, and chargeable events on an account-by-account basis. It is also the calculation of all outstanding charges and available discounts and bonuses.

The output from billing process is a stream of tagged bill data that can be used to create a bill on paper, disk, or any other media. Billing Engine, which is part of the Billing System, creates invoices. 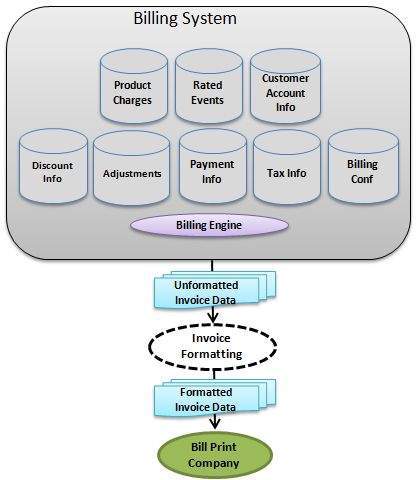 When a customer is added into the Billing System, system assigns the customer a predefined Bill Cycle. A bill cycle is a date on which Billing Engine runs and produces bills for a set of customers.

There could be various types of bills available for a user. Few of them may not be supported by some Billing Systems.

Bills are produced either automatically or on request from a customer.

A Billing System can generate bills in two modes, for example −

Billing Engine assigns different invoice numbers to all the production bills which help in keeping track of different payments made against the invoice.

There may be a situation when it is not worth to generate a bill and better to suppress the bill. Following are such type of situations −

A small bill is a bill that falls between the ranges defined by the minimum positive bill amount and the maximum negative bill amount, exceptional bill conditions. Small valued bills are produced and then removed from the billing process, so that they are not sent out to customers.

Examples of possible exceptional bills are unusually high bills or bills, which exceed the account's credit limit by a set multiplier. The Billing Engine performs some basic checks on the bill data that it produces. These involve testing the total being billed to ensure that the following conditions are met −

By default, all the invoices provide a detailed summary of product and service charges along with usage charges. But it does not provide the details on all the calls made by the customer.

An itemized bill means giving complete details of all the calls made by the customer. This needs more number of papers to be printed. Recent trend is to send itemized bill through electronic e-mail and summary statement is sent using a physical copy of the bill.

There are Billing Systems, which provide Billing Formatting utilities, which can be used to generate final formatted bills.

Bill formatters take the output data produced by the Billing Engine and usually generate either Post Script file or a PDF file, which can be used by the Bill Printing Company.

If Billing System is not capable enough to generate formatted bills, then system generates a set of tagged files along with billing information and any external Bill Formatter can use that tagged information to generate a well-formatted invoice.

No matter, if Billing System generates formatted invoice or we use an external tool to generate these formatted invoice using raw data generated by the billing engine, finally these invoices are sent to the bill printing company, who takes care of generating final copy of generating invoice. We will discuss it in detail in the subsequent chapter "Invoice Generation."

Next chapter would explain discount process, which is actually a part of rating and billing process, but we kept it as a separate section because of the various that items need more explanation.

We will discuss different types of discount hierarchies and which can be given at the time of rating and billing.