The main objective of the Object Relational Mapper API of SQLAlchemy is to facilitate associating user-defined Python classes with database tables, and objects of those classes with rows in their corresponding tables. Changes in states of objects and rows are synchronously matched with each other. SQLAlchemy enables expressing database queries in terms of user defined classes and their defined relationships.

Although a successful application may be constructed using the Object Relational Mapper exclusively, sometimes an application constructed with the ORM may use the Expression Language directly where specific database interactions are required.

First of all, create_engine() function is called to set up an engine object which is subsequently used to perform SQL operations. The function has two arguments, one is the name of database and other is an echo parameter when set to True will generate the activity log. If it doesn’t exist, the database will be created. In the following example, a SQLite database is created.

The Engine establishes a real DBAPI connection to the database when a method like Engine.execute() or Engine.connect() is called. It is then used to emit the SQLORM which does not use the Engine directly; instead, it is used behind the scenes by the ORM.

In case of ORM, the configurational process starts by describing the database tables and then by defining classes which will be mapped to those tables. In SQLAlchemy, these two tasks are performed together. This is done by using Declarative system; the classes created include directives to describe the actual database table they are mapped to.

Once base classis declared, any number of mapped classes can be defined in terms of it. Following code defines a Customer’s class. It contains the table to be mapped to, and names and datatypes of columns in it.

A class in Declarative must have a __tablename__ attribute, and at least one Column which is part of a primary key. Declarative replaces all the Column objects with special Python accessors known as descriptors. This process is known as instrumentation which provides the means to refer to the table in a SQL context and enables persisting and loading the values of columns from the database.

This mapped class like a normal Python class has attributes and methods as per the requirement.

The information about class in Declarative system, is called as table metadata. SQLAlchemy uses Table object to represent this information for a specific table created by Declarative. The Table object is created according to the specifications, and is associated with the class by constructing a Mapper object. This mapper object is not directly used but is used internally as interface between mapped class and table.

Each Table object is a member of larger collection known as MetaData and this object is available using the .metadata attribute of declarative base class. The MetaData.create_all() method is, passing in our Engine as a source of database connectivity. For all tables that haven’t been created yet, it issues CREATE TABLE statements to the database.

The complete script to create a database and a table, and to map Python class is given below −

If we open the Sales.db using SQLiteStudio graphic tool, it shows customers table inside it with above mentioned structure. 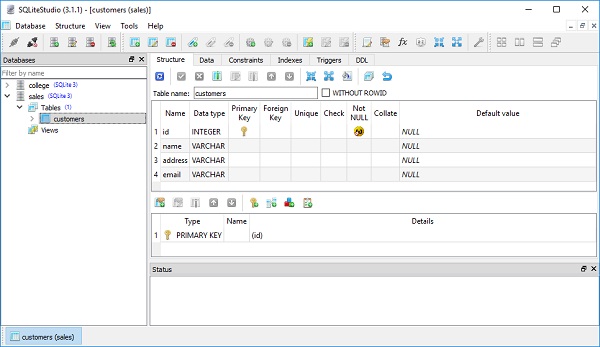