The game is usually played in a rectangular shaped playground which is usually flat, non-slippery, and is made of wood, cement or sports tile surface. Usually the arena has three standard sizes, which can be a minimum of 34x17 meters or an average size of 40x20 meters or a maximum size of 44x22 meters. The arena has round corners with a one meter wall surrounding it. 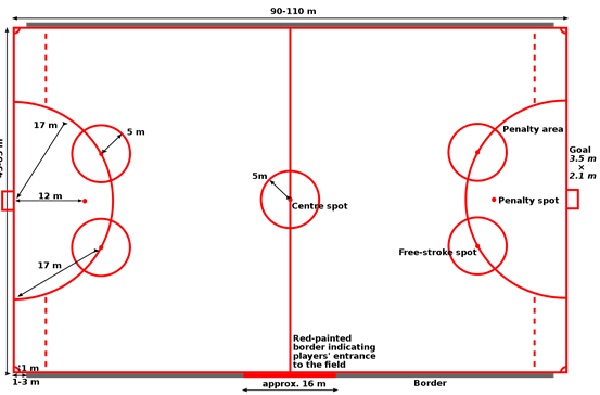 The markings made on the rink are simple. One line is drawn at the middle of the ring dividing the ring in two halves. An anti-play line is drawn 22 meters away from the end wall. This area is a 9 X 5.40 m rectangle and is placed 2.7 metres to 3.3 metres away from the end tables. A half circle with 1.5 m radius is drawn in the rectangle and is considered as the goalie protection area.

At the end of both sides, two goal posts are there whose size differs between game types. In case of quad hockey, the goal posts are 105 cm high and 170 cm wide whereas in case of inline hockey, the cages are very much similar to ice hockey cages. A wall of around 6 feet surrounds the playing area.