This tutorial will guide you on how to prepare a development environment to start your work with Jersey Framework to create RESTful Web Services. Jersey framework implements JAX-RS 2.0 API, which is a standard specification to create RESTful Web Services. This tutorial will also teach you how to setup JDK, Tomcat and Eclipse on your machine before you the Jersey Framework is setup.

You can download the latest version of SDK from Oracle's Java site − Java SE Downloads. You will find the instructions for installing JDK in the downloaded files. Follow the given instructions to install and configure the setup. Finally set the PATH and JAVA_HOME environment variables to refer to the directory that contains Java and Javac, typically java_install_dir/bin and java_install_dir respectively.

If you are running Windows and installed the JDK in C:\jdk1.7.0_75, you would have to put the following line in your C:\autoexec.bat file.

Alternatively, on Windows NT/2000/XP, you could also right-click on My Computer → select Properties → then Advanced → then Environment Variables. Then, you would update the PATH value and press the OK button.

On Unix (Solaris, Linux, etc.), if the SDK is installed in /usr/local/jdk1.7.0_75 and you use the C Shell, you would put the following into your .cshrc file.

Alternatively, if you use an Integrated Development Environment (IDE) like Borland JBuilder, Eclipse, IntelliJ IDEA, or Sun ONE Studio, compile and run a simple program to confirm that the IDE knows where you installed Java, otherwise do proper setup as given document of the IDE.

All the examples in this tutorial have been written using the Eclipse IDE. So, I would suggest you should have the latest version of Eclipse installed on your machine.

To install Eclipse IDE, download the latest Eclipse binaries from https://www.eclipse.org/downloads/. Once you downloaded the installation, unpack the binary distribution to a convenient location. For example, in C:\eclipse on windows, or /usr/local/eclipse on Linux/Unix and finally set the PATH variable appropriately.

Eclipse can be started by executing the following commands on a windows machine, or you can simply double click on eclipse.exe.

Eclipse can be started by executing the following commands on Unix (Solaris, Linux, etc.) machine −

After a successful startup, if everything is fine, then your screen should display the following result − 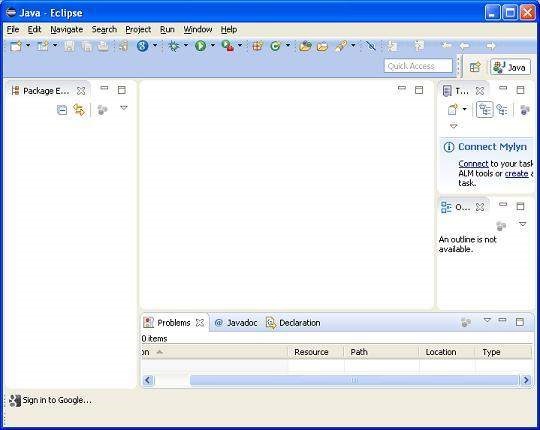 Now, if everything is fine, then you can proceed to setup the Jersey framework. Following are a few simple steps to download and install the framework on your machine.

You will find all the Jersey libraries in the directories C:\jaxrs-ri-2.17\jaxrs-ri\lib and dependencies in C:\jaxrs-ri-2.17\jaxrs-ri\ext. Make sure you set your CLASSPATH variable on this directory properly otherwise you will face problem while running your application. If you are using Eclipse, then it is not required to set the CLASSPATH because all the settings will be done through Eclipse.

Tomcat can be started by executing the following commands on a windows machine, or you can simply double click on startup.bat.

Tomcat can be started by executing the following commands on a Unix (Solaris, Linux, etc.) machine −

After a successful startup, the default web applications included with Tomcat will be available by visiting http://localhost:8080/. If everything is fine then it should display the following result − 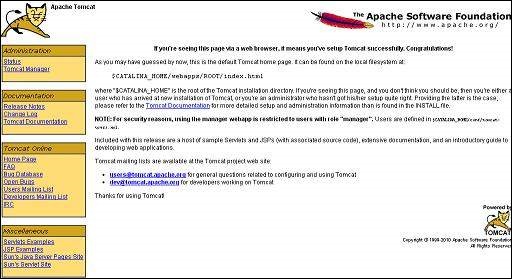 Further information about configuring and running Tomcat can be found in the documentation included on this page. This information can also be found on the Tomcat website − https://tomcat.apache.org.

Once you are done with this last step, you are ready to proceed for your first Jersey example which you will see in the next chapter.