The Racewalking tournament typically kicks off by a gun fire, with the athletes in their positions just at the start line. The tournaments are held on 10km, 20 km and 50 km distances.

A five minute, three minute and one minute warning signs are given to the athletes before beginning of the race, followed by a gun fire with an indication to all the participants to start the race.

Along with the athletes the judges play a very crucial role in Racewalking competitions. Six to nine judges are assigned for each tournament; along with a chief judge to constantly monitor the athlete’s walking technique throughout the tournament all along the road course until the player ends his race at the finish line. At any instance if an athlete gets 3 red cards from 3 different judges, the chief judge disqualifies the athlete from the race. 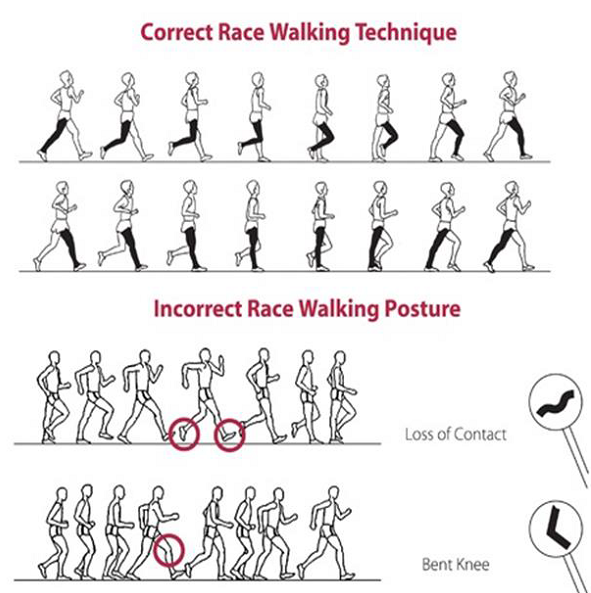 Racewalking refers to a movement of feet of the walker when the walker progresses forward making constant contact with the ground, and no visible loss of contact occurs at any point of time for the judges. Ideally this walking technique is popularly known as “heel-to-toe” motion keeping the arm to shoulder motion low to ground.

The next important technique of Racewalking is the advancing of the leg without bending at the knee being visible to the human eye known as the “lifting or bent knee” rule. From the instant of losing one foot contact from the ground the other foot shall be straightened until the first foot is back on the ground with vertical upright position.

Throughout the Racewalking challenge, the two rules if violated by the athletes for three times and three different judges notice the violation of techniques, the walker is given red card and is disqualified from the competition.

The athlete who finishes the Racewalking competition without violation of the rules, walks through the specified distance. Unlike other athletic sport events, in Racewalking the walker’s needs to touch the finish line before the other competitors as to declare the winner of the tournament.

Racewalking is a very tough disciplinary sport being physically monitored by multiple judges, yet the walkers are increasingly participating in the walking road events and competitions. The rules are clearly defined by the IAAF (International Association of Athletics Federation) for the participants of this sport as listed below −