Deep learning is a division of machine learning and is considered as a crucial step taken by researchers in recent decades. The examples of deep learning implementation include applications like image recognition and speech recognition.

The two important types of deep neural networks are given below −

In this chapter, we will be focusing on the first type, i.e., Convolutional Neural Networks (CNN).

The primary difference between CNN and any other ordinary neural network is that CNN takes input as a two dimensional array and operates directly on the images rather than focusing on feature extraction which other neural networks focus on.

The dominant approach of CNN includes solution for problems of recognition. Top companies like Google and Facebook have invested in research and development projects of recognition projects to get activities done with greater speed.

Let us understand each of these terminologies in detail.

CNN utilize spatial correlations that exists within the input data. Each in the concurrent layers of neural networks connects of some input neurons. This specific region is called Local Receptive Field. It only focusses on hidden neurons. The hidden neuron will process the input data inside the mentioned field not realizing the changes outside the specific boundary.

The diagram representation of generating local respective fields is mentioned below − 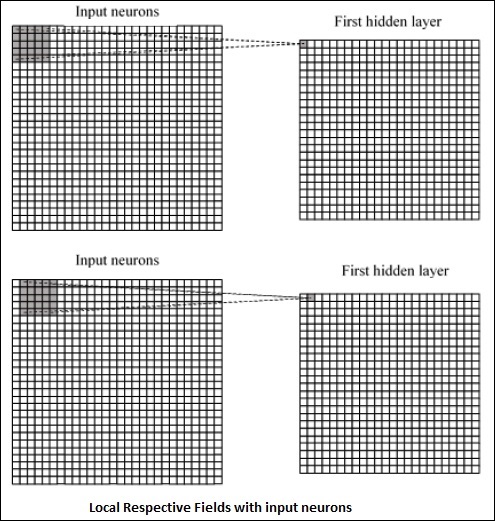 In the above figure, we observe that each connection learns a weight of hidden neuron with an associated connection with movement from one layer to another. Here, individual neurons perform a shift from time to time. This process is called “convolution”.

The mapping of connections from the input layer to the hidden feature map is defined as “shared weights” and bias included is called “shared bias”.

Import the necessary packages for creating a simple neural network.

Create a class with batch representation of convolutional neural network. Our batch shape for input x is with dimension of (3, 32, 32).

Recall that -1 infers this dimension from the other given dimension.