This chapter explains how to perform testing using web scrapers in Python.

In large web projects, automated testing of website’s backend is performed regularly but the frontend testing is skipped often. The main reason behind this is that the programming of websites is just like a net of various markup and programming languages. We can write unit test for one language but it becomes challenging if the interaction is being done in another language. That is why we must have suite of tests to make sure that our code is performing as per our expectation.

When we are talking about testing, it means unit testing. Before diving deep into testing with Python, we must know about unit testing. Following are some of the characteristics of unit testing −

Python module named Unittest for unit testing is comes with all the standard Python installation. We just need to import it and rest is the task of unittest.TestCase class which will do the followings −

In this example we are going to combine web scraping with unittest. We will test Wikipedia page for searching string ‘Python’. It will basically do two tests, first weather the title page is same as the search string i.e.‘Python’ or not and second test makes sure that the page has a content div.

First, we will import the required Python modules. We are using BeautifulSoup for web scraping and of course unittest for testing.

Now we need to define a class which will extend unittest.TestCase. Global object bs would be shared between all tests. A unittest specified function setUpClass will accomplish it. Here we will define two functions, one for testing the title page and other for testing the page content.

After running the above script we will get the following output −

Let us discuss how to use Python Selenium for testing. It is also called Selenium testing. Both Python unittest and Selenium do not have much in common. We know that Selenium sends the standard Python commands to different browsers, despite variation in their browser's design. Recall that we already installed and worked with Selenium in previous chapters. Here we will create test scripts in Selenium and use it for automation.

With the help of next Python script, we are creating test script for the automation of Facebook Login page. You can modify the example for automating other forms and logins of your choice, however the concept would be same.

First for connecting to web browser, we will import webdriver from selenium module −

Now, we need to import Keys from selenium module.

Next, provide the path to web driver for Chrome.

Now we will verify the conditions by using assert keyword.

Next line of code is used to press enter/login after inserting the values in email and password field.

Now we will close the browser.

After running the above script, Chrome web browser will be opened and you can see email and password is being inserted and clicked on login button. 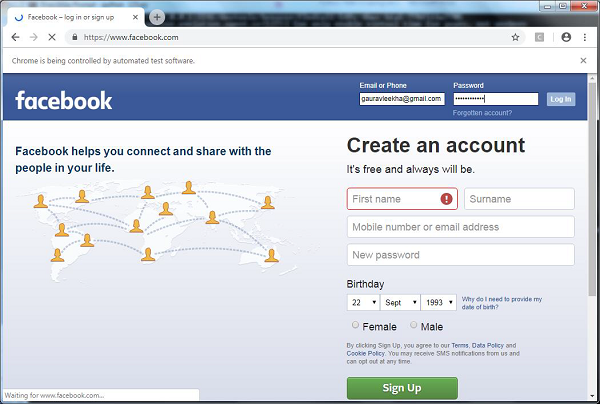 The comparison of unittest and selenium is difficult because if you want to work with large test suites, the syntactical rigidity of unites is required. On the other hand, if you are going to test website flexibility then Selenium test would be our first choice. But what if we can combine both of them. We can import selenium into Python unittest and get the best of both. Selenium can be used to get information about a website and unittest can evaluate whether that information meets the criteria for passing the test or not.

For example, we are rewriting the above Python script for automation of Facebook login by combining both of them as follows −