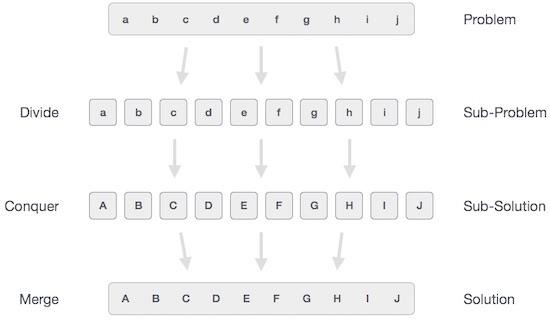 Broadly, we can understand divide-and-conquer approach in a three-step process.

This step receives a lot of smaller sub-problems to be solved. Generally, at this level, the problems are considered 'solved' on their own.

When the smaller sub-problems are solved, this stage recursively combines them until they formulate a solution of the original problem. This algorithmic approach works recursively and conquer &amps merge steps works so close that they appear as one.

The following program is an example of divide-and-conquer programming approach where the binary search is implemented using python.

This is possible as the list is sorted and it is much quicker than linear search.Here we divide the given list and conquer by choosing the proper half of the list. We repeat this approcah till we find the element or conclude about it's absence in the list.