An until loop statement in Perl programming language repeatedly executes a target statement as long as a given condition is false.

The syntax of an until loop in Perl programming language is −

The number 0, the strings '0' and "" , the empty list () , and undef are all false in a boolean context and all other values are true. Negation of a true value by ! or not returns a special false value. 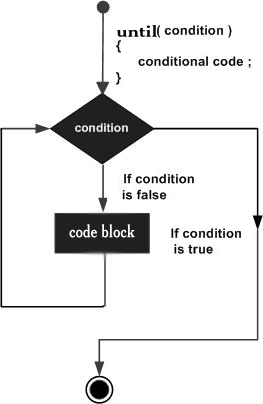 Here key point of the until loop is that the loop might not ever run. When the condition is tested and the result is true, the loop body will be skipped and the first statement after the until loop will be executed.

Here we are using the comparison operator > to compare value of variable $a against 10. So until the value of $a is less than 10, until loop continues executing a block of code next to it and as soon as the value of $a becomes greater than 10, it comes out. When executed, above code produces the following result −