Parallel Random Access Machines (PRAM) is a model, which is considered for most of the parallel algorithms. Here, multiple processors are attached to a single block of memory. A PRAM model contains − 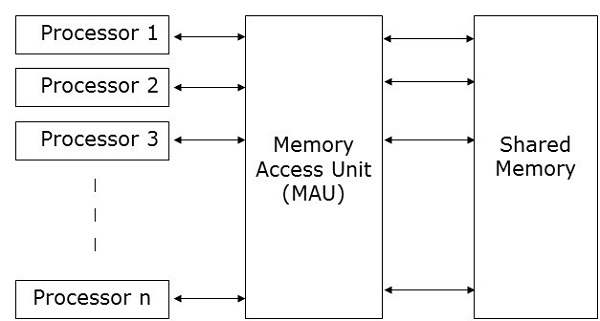 Here, n number of processors can perform independent operations on n number of data in a particular unit of time. This may result in simultaneous access of same memory location by different processors.

To solve this problem, the following constraints have been enforced on PRAM model −

There are many methods to implement the PRAM model, but the most prominent ones are −

Shared memory emphasizes on control parallelism than on data parallelism. In the shared memory model, multiple processes execute on different processors independently, but they share a common memory space. Due to any processor activity, if there is any change in any memory location, it is visible to the rest of the processors.

As multiple processors access the same memory location, it may happen that at any particular point of time, more than one processor is accessing the same memory location. Suppose one is reading that location and the other is writing on that location. It may create confusion. To avoid this, some control mechanism, like lock / semaphore, is implemented to ensure mutual exclusion.

Shared memory programming has been implemented in the following −

Examples of thread libraries include − SolarisTM threads for Solaris, POSIX threads as implemented in Linux, Win32 threads available in Windows NT and Windows 2000, and JavaTM threads as part of the standard JavaTM Development Kit (JDK).

Message passing is the most commonly used parallel programming approach in distributed memory systems. Here, the programmer has to determine the parallelism. In this model, all the processors have their own local memory unit and they exchange data through a communication network.

Processors use message-passing libraries for communication among themselves. Along with the data being sent, the message contains the following components −

Point-to-point communication is the simplest form of message passing. Here, a message can be sent from the sending processor to a receiving processor by any of the following transfer modes −

Messages broadcasted may be of three types −

It is a universal standard to provide communication among all the concurrent processes in a distributed memory system. Most of the commonly used parallel computing platforms provide at least one implementation of message passing interface. It has been implemented as the collection of predefined functions called library and can be called from languages such as C, C++, Fortran, etc. MPIs are both fast and portable as compared to the other message passing libraries.

PVM is a portable message passing system, designed to connect separate heterogeneous host machines to form a single virtual machine. It is a single manageable parallel computing resource. Large computational problems like superconductivity studies, molecular dynamics simulations, and matrix algorithms can be solved more cost effectively by using the memory and the aggregate power of many computers. It manages all message routing, data conversion, task scheduling in the network of incompatible computer architectures.

Data parallel languages help to specify the data decomposition and mapping to the processors. It also includes data distribution statements that allow the programmer to have control on data – for example, which data will go on which processor – to reduce the amount of communication within the processors.