Network layer security controls have been used frequently for securing communications, particularly over shared networks such as the Internet because they can provide protection for many applications at once without modifying them.

In the earlier chapters, we discussed that many real-time security protocols have evolved for network security ensuring basic tenets of security such as privacy, origin authentication, message integrity, and non-repudiation.

Most of these protocols remained focused at the higher layers of the OSI protocol stack, to compensate for inherent lack of security in standard Internet Protocol. Though valuable, these methods cannot be generalized easily for use with any application. For example, SSL is developed specifically to secure applications like HTTP or FTP. But there are several other applications which also need secure communications.

This need gave rise to develop a security solution at the IP layer so that all higher-layer protocols could take advantage of it. In 1992, the Internet Engineering Task Force (IETF) began to define a standard ‘IPsec’.

In this chapter, we will discuss how security is achieved at network layer using this very popular set of protocol IPsec.

The important security functions provided by the IPsec are as follows −

Ideally, any institution would want its own private network for communication to ensure security. However, it may be very costly to establish and maintain such private network over geographically dispersed area. It would require to manage complex infrastructure of communication links, routers, DNS, etc.

IPsec provides an easy mechanism for implementing Virtual Private Network (VPN) for such institutions. VPN technology allows institution’s inter-office traffic to be sent over public Internet by encrypting traffic before entering the public Internet and logically separating it from other traffic. The simplified working of VPN is shown in the following diagram − 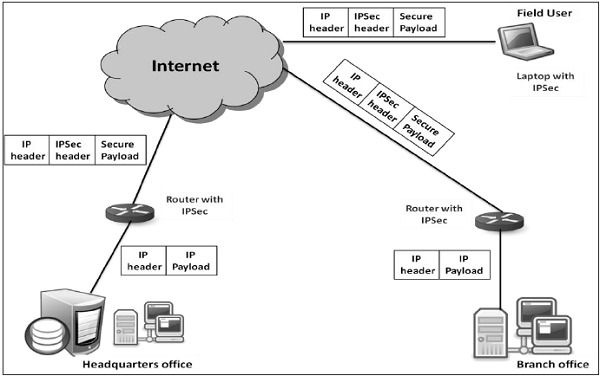 IPsec is a framework/suite of protocols for providing security at the IP layer.

In early 1990s, Internet was used by few institutions, mostly for academic purposes. But in later decades, the growth of Internet became exponential due to expansion of network and several organizations using it for communication and other purposes.

The IAB included authentication and encryption as essential security features in the IPv6, the next-generation IP. Fortunately, these security capabilities were defined such that they can be implemented with both the current IPv4 and futuristic IPv6.

Security framework, IPsec has been defined in several ‘Requests for comments’ (RFCs). Some RFCs specify some portions of the protocol, while others address the solution as a whole.

The IPsec suite can be considered to have two separate operations, when performed in unison, providing a complete set of security services. These two operations are IPsec Communication and Internet Key Exchange.

IPsec Communication has two modes of functioning; transport and tunnel modes. These modes can be used in combination or used individually depending upon the type of communication desired.

IPsec uses the security protocols to provide desired security services. These protocols are the heart of IPsec operations and everything else is designed to support these protocol in IPsec.

Security associations between the communicating entities are established and maintained by the security protocol used.

The AH protocol provides service of data integrity and origin authentication. It optionally caters for message replay resistance. However, it does not provide any form of confidentiality.

AH is a protocol that provides authentication of either all or part of the contents of a datagram by the addition of a header. The header is calculated based on the values in the datagram. What parts of the datagram are used for the calculation, and where to place the header, depends on the mode cooperation (tunnel or transport).

The operation of the AH protocol is surprisingly simple. It can be considered similar to the algorithms used to calculate checksums or perform CRC checks for error detection.

The concept behind AH is the same, except that instead of using a simple algorithm, AH uses special hashing algorithm and a secret key known only to the communicating parties. A security association between two devices is set up that specifies these particulars.

The process of AH goes through the following phases. 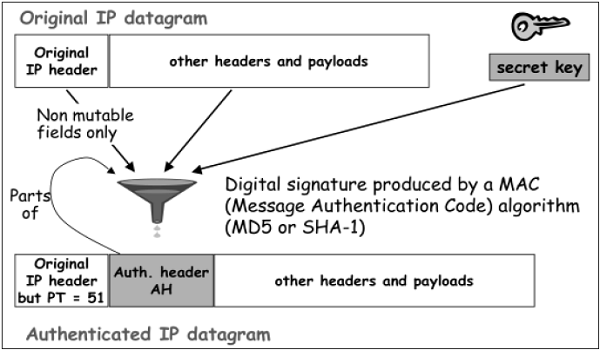 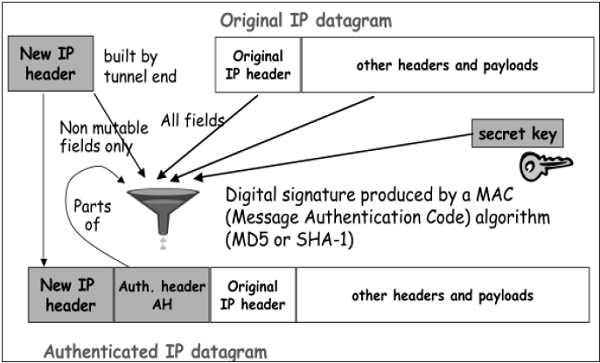 In ESP, algorithms used for encryption and generating authenticator are determined by the attributes used to create the SA.

The process of ESP is as follows. The first two steps are similar to process of AH as stated above. 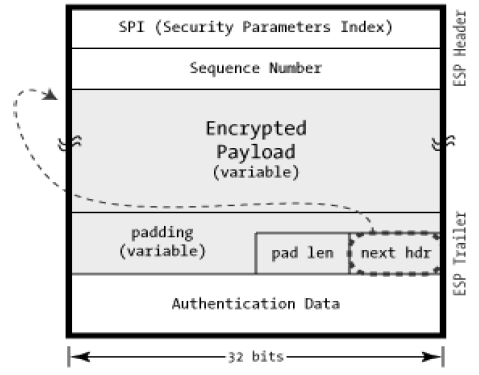 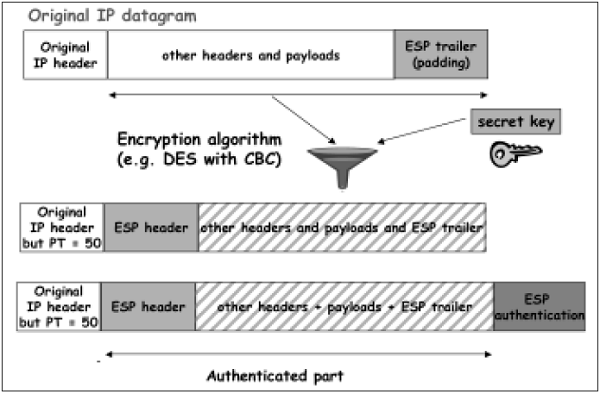 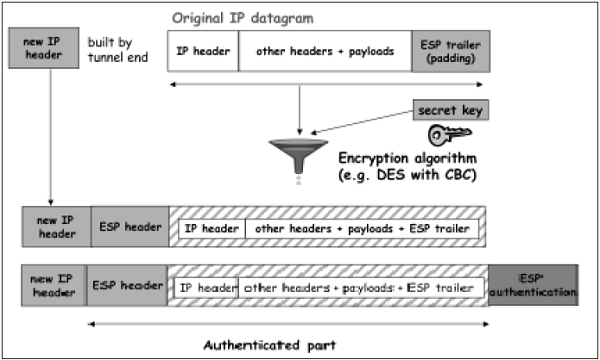 Although authentication and confidentiality are the primary services provided by ESP, both are optional. Technically, we can use NULL encryption without authentication. However, in practice, one of the two must be implemented to use ESP effectively.

Security Association (SA) is the foundation of an IPsec communication. The features of SA are −

Any SA is uniquely identified by the following three parameters −

Example of SA between two router involved in IPsec communication is shown in the following diagram. 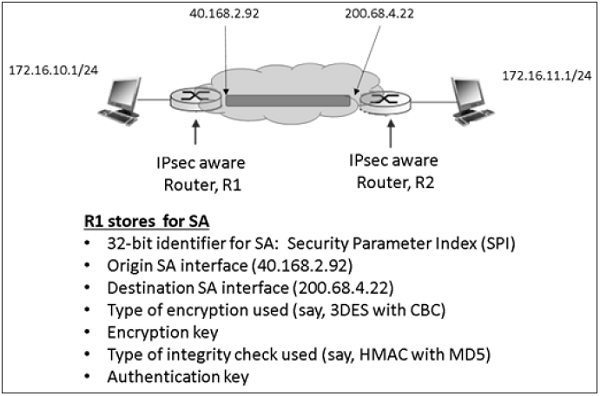 In IPsec, there are two databases that control the processing of IPsec datagram. One is the Security Association Database (SAD) and the other is the Security Policy Database (SPD). Each communicating endpoint using IPsec should have a logically separate SAD and SPD.

All SA entries in the SAD are indexed by the three SA parameters: Destination IP address, Security Protocol Identifier, and SPI.

SPD is used for processing outgoing packets. It helps in deciding what SAD entries should be used. If no SAD entry exists, SPD is used to create new ones.

Any SPD entry would contain −

Outgoing IP datagrams go from the SPD entry to the specific SA, to get encoding parameters. Incoming IPsec datagram get to the correct SA directly using the SPI/DEST IP/Protocol triple, and from there extracts the associated SAD entry.

SPD can also specify traffic that should bypass IPsec. SPD can be considered as a packet filter where the actions decided upon are the activation of SA processes.

IPsec is a suite of protocols for securing network connections. It is rather a complex mechanism, because instead of giving straightforward definition of a specific encryption algorithm and authentication function, it provides a framework that allows an implementation of anything that both communicating ends agree upon.

Authentication Header (AH) and Encapsulating Security Payload (ESP) are the two main communication protocols used by IPsec. While AH only authenticate, ESP can encrypt and authenticate the data transmitted over the connection.

Transport Mode provides a secure connection between two endpoints without changing the IP header. Tunnel Mode encapsulates the entire payload IP packet. It adds new IP header. The latter is used to form a traditional VPN, as it provides a virtual secure tunnel across an untrusted Internet.

Setting up an IPsec connection involves all kinds of crypto choices. Authentication is usually built on top of a cryptographic hash such as MD5 or SHA-1. Encryption algorithms are DES, 3DES, Blowfish, and AES being common. Other algorithms are possible too.

Both communicating endpoints need to know the secret values used in hashing or encryption. Manual keys require manual entry of the secret values on both ends, presumably conveyed by some out-of-band mechanism, and IKE (Internet Key Exchange) is a sophisticated mechanism for doing this online.