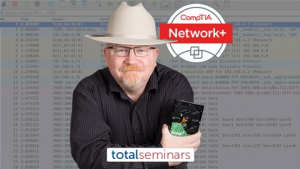 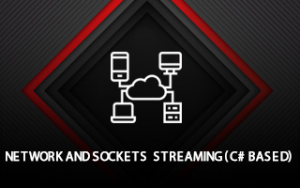 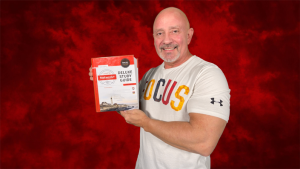 Almost every medium and large-scale organization has a presence on the Internet and has an organizational network connected to it. Network partitioning at the boundary between the outside Internet and the internal network is essential for network security. Sometimes the inside network (intranet) is referred to as the “trusted” side and the external Internet as the “un-trusted” side.

Firewall is a network device that isolates organization’s internal network from larger outside network/Internet. It can be a hardware, software, or combined system that prevents unauthorized access to or from internal network.

All data packets entering or leaving the internal network pass through the firewall, which examines each packet and blocks those that do not meet the specified security criteria.

Deploying firewall at network boundary is like aggregating the security at a single point. It is analogous to locking an apartment at the entrance and not necessarily at each door. 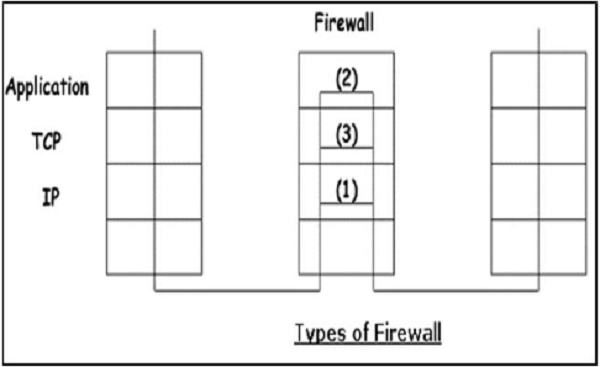 In this type of firewall deployment, the internal network is connected to the external network/Internet via a router firewall. The firewall inspects and filters data packet-by-packet.

The decision can be based on factors other than IP header fields such as ICMP message type, TCP SYN and ACK bits, etc.

Packet filtering is generally accomplished by configuring Access Control Lists (ACL) on routers or switches. ACL is a table of packet filter rules.

As traffic enters or exits an interface, firewall applies ACLs from top to bottom to each incoming packet, finds matching criteria and either permits or denies the individual packets.

Stateless firewall is a kind of a rigid tool. It looks at packet and allows it if its meets the criteria even if it is not part of any established ongoing communication.

Stateful firewall monitors the connection setup and teardown process to keep a check on connections at the TCP/IP level. This allows them to keep track of connections state and determine which hosts have open, authorized connections at any given point in time.

They reference the rule base only when a new connection is requested. Packets belonging to existing connections are compared to the firewall's state table of open connections, and decision to allow or block is taken. This process saves time and provides added security as well. No packet is allowed to trespass the firewall unless it belongs to already established connection. It can timeout inactive connections at firewall after which it no longer admit packets for that connection.

An application-level gateway acts as a relay node for the application-level traffic. They intercept incoming and outgoing packets, run proxies that copy and forward information across the gateway, and function as a proxy server, preventing any direct connection between a trusted server or client and an untrusted host.

If a network relies only on an application-level gateway, incoming and outgoing packets cannot access services that have no proxies configured. For example, if a gateway runs FTP and Telnet proxies, only packets generated by these services can pass through the firewall. All other services are blocked.

Application gateways can restrict specific actions from being performed. For example, the gateway could be configured to prevent users from performing the ‘FTP put’ command. This can prevent modification of the information stored on the server by an attacker.

For outbound packets, the gateway may replace the source IP address by its own IP address. The process is referred to as Network Address Translation (NAT). It ensures that internal IP addresses are not exposed to the Internet.

The circuit-level gateway is an intermediate solution between the packet filter and the application gateway. It runs at the transport layer and hence can act as proxy for any application.

SOCKS (RFC 1928) refers to a circuit-level gateway. It is a networking proxy mechanism that enables hosts on one side of a SOCKS server to gain full access to hosts on the other side without requiring direct IP reachability. The client connects to the SOCKS server at the firewall. Then the client enters a negotiation for the authentication method to be used, and authenticates with the chosen method.

The client sends a connection relay request to the SOCKS server, containing the desired destination IP address and transport port. The server accepts the request after checking that the client meets the basic filtering criteria. Then, on behalf of the client, the gateway opens a connection to the requested untrusted host and then closely monitors the TCP handshaking that follows.

The SOCKS server informs the client, and in case of success, starts relaying the data between the two connections. Circuit level gateways are used when the organization trusts the internal users, and does not want to inspect the contents or application data sent on the Internet.

A firewall is a mechanism used to control network traffic ‘into’ and ‘out’ of an organizational internal network. In most cases these systems have two network interfaces, one for the external network such as the Internet and the other for the internal side.

The firewall process can tightly control what is allowed to traverse from one side to the other. An organization that wishes to provide external access to its web server can restrict all traffic arriving at firewall expect for port 80 (the standard http port). All other traffic such as mail traffic, FTP, SNMP, etc., is not allowed across the firewall into the internal network. An example of a simple firewall is shown in the following diagram.

In the above simple deployment, though all other accesses from outside are blocked, it is possible for an attacker to contact not only a web server but any other host on internal network that has left port 80 open by accident or otherwise.

Hence, the problem most organizations face is how to enable legitimate access to public services such as web, FTP, and e-mail while maintaining tight security of the internal network. The typical approach is deploying firewalls to provide a Demilitarized Zone (DMZ) in the network.

In this setup (illustrated in following diagram), two firewalls are deployed; one between the external network and the DMZ, and another between the DMZ and the internal network. All public servers are placed in the DMZ.

With this setup, it is possible to have firewall rules which allow public access to the public servers but the interior firewall can restrict all incoming connections. By having the DMZ, the public servers are provided with adequate protection instead of placing them directly on external network. 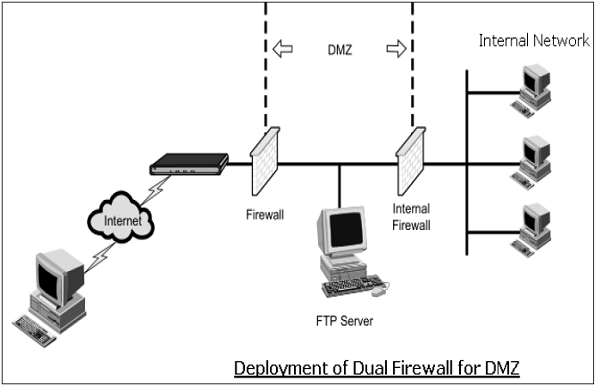 The packet filtering firewalls operate based on rules involving TCP/UDP/IP headers only. They do not attempt to establish correlation checks among different sessions.

Application gateways do look at the packet contents but only for specific applications. They do not look for suspicious data in the packet. IDS/IPS looks for suspicious data contained in packets and tries to examine correlation among multiple packets to identify any attacks such as port scanning, network mapping, and denial of service and so on.

Difference between IDS and IPS

IDS and IPS are similar in detection of anomalies in the network. IDS is a ‘visibility’ tool whereas IPS is considered as a ‘control’ tool.

Intrusion Detection Systems sit off to the side of the network, monitoring traffic at many different points, and provide visibility into the security state of the network. In case of reporting of anomaly by IDS, the corrective actions are initiated by the network administrator or other device on the network.

Intrusion Prevention System are like firewall and they sit in-line between two networks and control the traffic going through them. It enforces a specified policy on detection of anomaly in the network traffic. Generally, it drops all packets and blocks the entire network traffic on noticing an anomaly till such time an anomaly is addressed by the administrator. 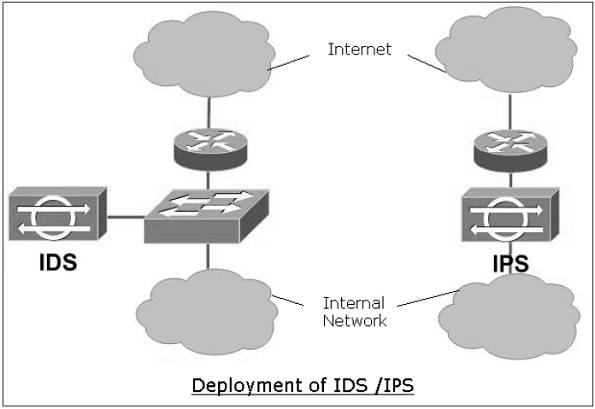 There are two basic types of IDS.

In this chapter, we discussed the various mechanisms employed for network access control. The approach to network security through access control is technically different than implementing security controls at different network layers discussed in the earlier chapters of this tutorial. However, though the approaches of implementation are different, they are complementary to each other.

Firewall provides network boundary protection by separating an internal network from the public Internet. Firewall can function at different layers of network protocol. IDS/IPS allows to monitor the anomalies in the network traffic to detect the attack and take preventive action against the same.