Various business services are now offered online though client-server applications. The most popular forms are web application and e-mail. In both applications, the client communicates to the designated server and obtains services.

While using a service from any server application, the client and server exchange a lot of information on the underlying intranet or Internet. We are aware of fact that these information transactions are vulnerable to various attacks.

Network security entails securing data against attacks while it is in transit on a network. To achieve this goal, many real-time security protocols have been designed. Such protocol needs to provide at least the following primary objectives −

In this chapter, we will discuss different processes for achieving security for e-mail communication and associated security protocols. The method for securing DNS is covered subsequently. In the later chapters, the protocols to achieve web security will be described.

The simplest way of sending an e-mail would be sending a message directly from the sender’s machine to the recipient’s machine. In this case, it is essential for both the machines to be running on the network simultaneously. However, this setup is impractical as users may occasionally connect their machines to the network.

Hence, the concept of setting up e-mail servers arrived. In this setup, the mail is sent to a mail server which is permanently available on the network. When the recipient’s machine connects to the network, it reads the mail from the mail server.

Typically, an e-mail message gets forwarded from its UA, goes through the mesh of MTAs and finally reaches the UA on the recipient’s machine.

The protocols used for e-mail are as follows −

Basic Internet e-mail standard was written in 1982 and it describes the format of e-mail message exchanged on the Internet. It mainly supports e-mail message written as text in basic Roman alphabet.

By 1992, the need was felt to improve the same. Hence, an additional standard Multipurpose Internet Mail Extensions (MIME) was defined. It is a set of extensions to the basic Internet E-mail standard. MIME provides an ability to send e-mail using characters other than those of the basic Roman alphabet such as Cyrillic alphabet (used in Russian), the Greek alphabet, or even the ideographic characters of Chinese.

Another need fulfilled by MIME is to send non-text contents, such as images or video clips. Due to this features, the MIME standard became widely adopted with SMTP for e-mail communication.

Typically, there are three different scenarios of e-mail communication. We will discuss the methods of achieving above security services in these scenarios.

In this scenario, the sender sends an e-mail message to only one recipient. Usually, not more than two MTA are involved in the communication.

Let’s assume a sender wants to send a confidential e-mail to a recipient. The provision of privacy in this case is achieved as follows −

If message integrity, authentication, and non-repudiation services are also needed in this scenario, the following steps are added to the above process.

In this scenario, the sender sends an e-mail message to two or more recipients. The list is managed by the sender’s e-mail program (UA + local MTA). All recipients get the same message.

Let’s assume, the sender wants to send confidential e-mail to many recipients (say R1, R2, and R3). The provision of privacy in this case is achieved as follows −

For providing the message integrity, authentication, and non-repudiation, the steps to be followed are similar to the steps mentioned above in one-to-one e-mail scenario.

In this scenario, the sender sends an e-mail message to two or more recipients but the list of recipients is not managed locally by the sender. Generally, the e-mail server (MTA) maintains the mailing list.

The sender sends a mail to the MTA managing the mailing list and then the mail is exploded by MTA to all recipients in the list.

In this case, when the sender wants to send a confidential e-mail to the recipients of the mailing list (say R1, R2, and R3); the privacy is ensured as follows −

For providing the message integrity, authentication, and non-repudiation the steps to be followed are similar as given in case of one-to-one e-mail scenario.

Interestingly, the e-mail program employing above security method for securing e-mail is expected to work for all the possible scenarios discussed above. Most of the above security mechanisms for e-mail are provided by two popular schemes, Pretty Good Privacy (PGP) and S/MIME. We discuss both in the following sections.

Pretty Good Privacy (PGP) is an e-mail encryption scheme. It has become the de-facto standard for providing security services for e-mail communication.

Along with these security services, it also provides data compression and key management support. PGP uses existing cryptographic algorithms such as RSA, IDEA, MD5, etc., rather than inventing the new ones.

The format of PGP message is shown in the following diagram. The IDs indicate which key is used to encrypt KS and which key is to be used to verify the signature on the hash. 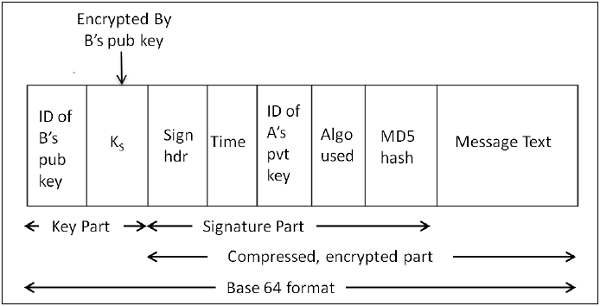 In PGP scheme, a message in signed and encrypted, and then MIME is encoded before transmission.

In a PGP environment, any user can act as a certifying authority. Any PGP user can certify another PGP user's public key. However, such a certificate is only valid to another user if the user recognizes the certifier as a trusted introducer.

Several issues exist with such a certification method. It may be difficult to find a chain leading from a known and trusted public key to desired key. Also, there might be multiple chains which can lead to different keys for desired user.

PGP can also use the PKI infrastructure with certification authority and public keys can be certified by CA (X.509 certificate).

S/MIME stands for Secure Multipurpose Internet Mail Extension. S/MIME is a secure e-mail standard. It is based on an earlier non-secure e-mailing standard called MIME.

The most common symmetric ciphers used in S/MIME are RC2 and TripleDES. The usual public key method is RSA, and the hashing algorithm is SHA-1 or MD5.

S/MIME specifies the additional MIME type, such as “application/pkcs7-mime”, for data enveloping after encrypting. The whole MIME entity is encrypted and packed into an object. S/MIME has standardized cryptographic message formats (different from PGP). In fact, MIME is extended with some keywords to identify the encrypted and/or signed parts in the message.

Due to the requirement of a certificate from certification authority for implementation, not all users can take advantage of S/MIME, as some may wish to encrypt a message, with a public/private key pair. For example, without the involvement or administrative overhead of certificates.

In practice, although most e-mailing applications implement S/MIME, the certificate enrollment process is complex. Instead PGP support usually requires adding a plug-in and that plug-in comes with all that is needed to manage keys. The Web of Trust is not really used. People exchange their public keys over another medium. Once obtained, they keep a copy of public keys of those with whom e-mails are usually exchanged.

Implementation layer in network architecture for PGP and S/MIME schemes is shown in the following image. Both these schemes provide application level security of for e-mail communication.

One of the schemes, either PGP or S/MIME, is used depending on the environment. A secure e-email communication in a captive network can be provided by adapting to PGP. For e-mail security over Internet, where mails are exchanged with new unknown users very often, S/MIME is considered as a good option.

In the first chapter, we have mentioned that an attacker can use DNS Cache Poisoning to carry out an attack on the target user. Domain Name System Security Extensions (DNSSEC) is an Internet standard that can foil such attacks.

In a standard DNS scheme, whenever the user wants to connect to any domain name, his computer contacts the DNS server and looks up the associated IP address for that domain name. Once IP address is obtained, the computer then connects to that IP address.

In this scheme, there is no verification process involved at all. A computer asks its DNS server for the address associated with a website, the DNS server responds with an IP address, and your computer undoubtedly accepts it as legitimate response and connects to that website. 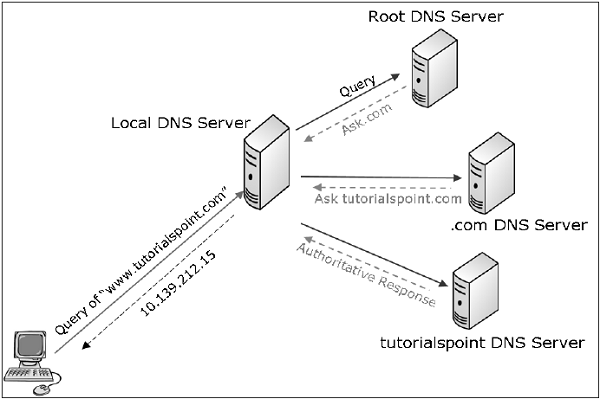 DNS lookup, when performed using DNSSEC, involves signing of replies by the responding entity. DNSSEC is based on public-key cryptography.

In DNSSEC standard, every DNS zone has a public/private key pair. All information sent by a DNS server is signed with the originating zone’s private key for ensuring authenticity. DNS clients need to know the zone’s public keys to check the signatures. Clients may be preconfigured with the public keys of all the top-level domains, or root DNS.

With DNSSEC, the lookup process goes as follows −

Thus, it is considered that when DNSSEC is fully rolled out, the user’s computer is able to confirm that DNS responses are legitimate and true, and avoid DNS attacks launched through DNS cache poisoning.

The process of securing e-mails ensures the end-to-end security of the communication. It provides security services of confidentiality, sender authentication, message integrity, and non-repudiation.

Two schemes have been developed for e-mail security: PGP and S/MIME. Both these schemes use secret-key and public-key cryptography.

Standard DNS lookup is vulnerable to the attacks such as DNS spoofing/cache poisoning. Securing DNS lookup is feasible through the use of DNSSEC which employs the public-key cryptography.

In this chapter, we discussed the mechanisms used at application layer to provide network security for end-to-end communication.