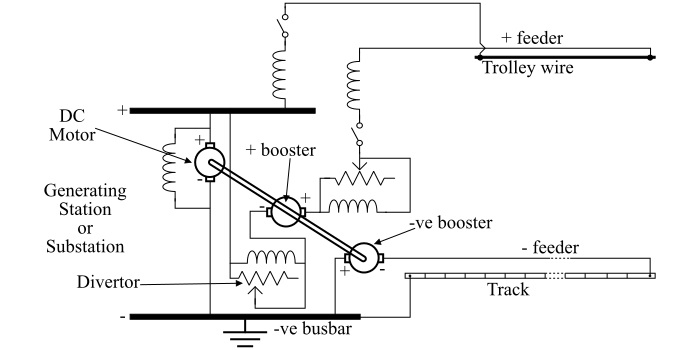 As in case of DC traction system, the return current flows through the rails to the substations. Because of this current flow through the rails, some voltage drop exists along the track. Due to potential difference along the track, some of the return currents leak out to the earth and follow the path of low resistance provided by water pipes, gas pipes, cable sheaths, etc.

Methods to Maintain the Voltage Drop

In the whole assembly, there are two boosters used, one is positive booster which adds voltage to the line and the other is the negative booster which lowers the potential of the point to which it is connected. Both the boosters are mechanically coupled together and are driven by a DC motor.

The boost of the feeder is adjusted by means of a diverter rheostat connected in parallel with the field winding of the positive booster.