Middleware functions are functions that have access to the context object and the next middleware function in the application’s request-response cycle. These functions are used to modify the request and response objects for tasks such as parsing request bodies, adding response headers, etc. Koa goes a step further by yielding 'downstream', then flowing the control back 'upstream'. This effect is called cascading.

Following is a simple example of a middleware function in action.

The above middleware is called for every request on the server. Thus after every request, we will get the following message in the console.

To restrict it to a specific route (and all its subroutes), we just need to create the routes like we did for routing. Actually its these middleware only that handle our request.

Now whenever you request any subroute of '/request', only then it'll log the time.

When we visit '/' after running this code, on our console we will get −

The following diagram summarizes what is actually happening in the above example. 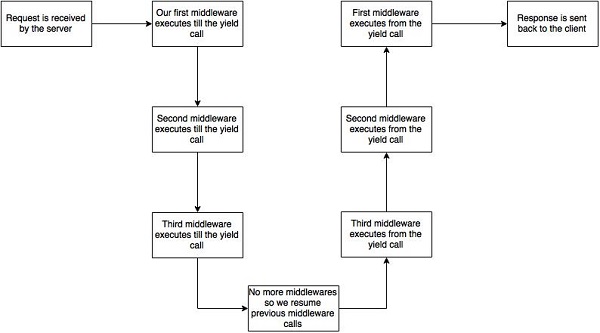 Now that we know how to create our own middleware, let us discuss some of the most commonly used community created middleware.

A list of third party middleware for express is available here. Following are some of the most commonly used middleware −