When it comes to consumption and production, the knowledge economy refers to a system founded on intellectual capital. The capacity to profit on scientific discoveries, as well as fundamental and applied research, is specifically referred to as innovation. These activities have grown to constitute a significant portion of all business growth in most industrialized nations. 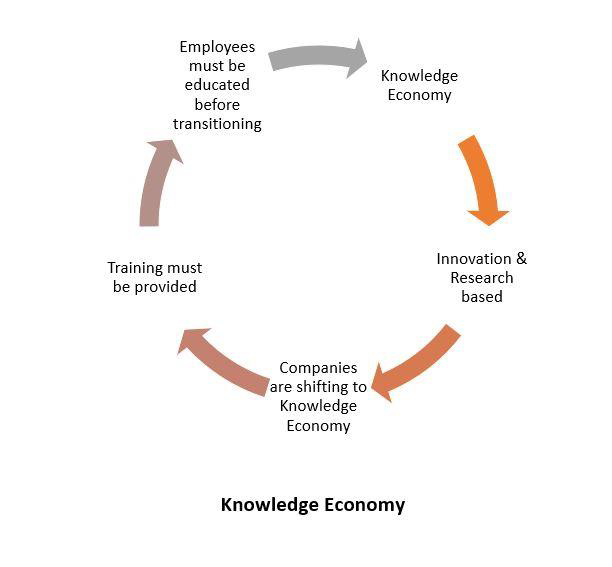 significantly to the growth of the company.

Let us consider a company ABC.INC that is involved in developing a new software. The research & development department (R & D) works in developing, analyzing trends, to develop the new computer so that their users can enjoy it more. This information could be shared with technical development team who uses this research while developing the new software.

Economies that are mostly focused on agriculture and manufacture are from the less developed nations and it is generally believed that a sign of developed economy is focus on services and manufacturing sector.

While broadly these three are the major revenue generation sectors for nations, these could vastly differ depending on the countries. Knowledge economy consists of research, consultancy and other related fields.

Bayh-Dole Act of 1980 was a watershed in the handling of property rights in the United States because it enabled universities to retain ownership of innovations or discoveries produced with federal research and development money and to negotiate exclusive agreements with third parties.

As there is vast amount of information being shared, it is natural that we have evolved towards knowledge economy. This allows individuals and companies with frameworks to protect their rights and businesses. It must be noted that companies are not allowed to incorporate these assets on their balance sheets under generally accepted accounting standards (GAAP).

What issues must companies consider?

Before the decision to transition is actually made, the company must make sure the employees are ready to adapt to the new work environment. This could be done through training programs to smoothen the transition.