Kanban is a Japanese word that literally means “visual card”. Kanban cards were originally used in Toyota to limit the amount of inventory tied up in “work in progress” on a manufacturing floor. Kanban not only reduces excess inventory waste, but also the time spent in producing it. In addition, all of the resources and time freed by the implementation of a Kanban system can be used for future expansions or new opportunities. The original author of Kanban was Taiichi Ohno.

Kanban term came into existence using the flavors of “visual card,” “signboard,” or “billboard”, “signaling system” to indicate a workflow that limits Work In Progress (WIP). Kanban has been used in Lean Production for over `half-century.

The core concept of Kanban includes −

This concept of Kanban is a direct implementation of a Lean Pull Scheduling System. An item can move to the next segment / state only when it obtains a slot in there. 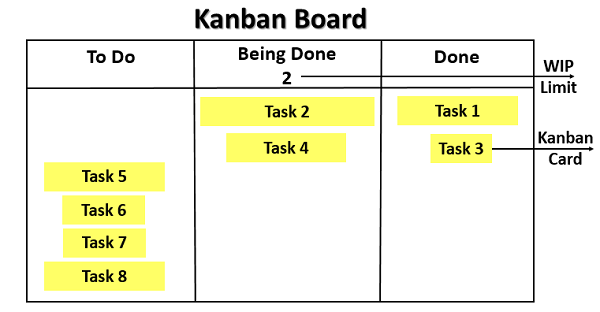 The implementation of Kanban, as well as other Lean Manufacturing Methods, such as Kaizen, can have significant benefits for almost any type of work. Kanban is more effective because it visually indicates when the production should start and stop. It is faster, more efficient, and saves significant money over most other production models. It is also far more directly responsive to customer demand.

In agile, if values are combined with Kanban characteristics, the outcome would be Agile Kanban. This practice is gaining popularity in Software Development wherein the Agile iteration approach and Kanban value stream focus are combined.