Industry 4.0 the changing face of manufacturing

The industrial landscape is transforming, with technology bridging the gap between the digital and physical world of manufacturing. Loosely being termed as the ‘next Industrial Revolution,’ systems are being connected intelligently within the entire value chain and support activities of manufacturing; the new face being known as ‘Industry 4.0.’ Over the next decade, Industry 4.0 is expected to add $14.2 trillion to the world economy.

Industry 4.0 appositely implies reduced costs, enhanced efficiency and productivity, increased work speed and scale, smarter and proficient products and services. It also refers to the Industrial Internet of Things (IoT). Here, products and services connect, collect data, communicate with users and offer additional services. Every process is digitized in all sectors where companies integrate all aspects of manufacturing to technology, thereby improving the entire value chain. This also leads to a newer aspect of improving simple products which can contribute to the growth of the company.

In this era of manufacturing, physical elements blend with communications, data and IT processes to transform conventional plants into small factories. The entire industrial ecosystem changes as machines interact with other machines and products, and deliver process, analyze and share the data collected in real time giving a push to critical decisions. Simply put, it is not just the machinery producing the output, but it is the product which informs the machinery on what must be done. Robots are operated with machine learning algorithms or the artificial intelligence, and the cyber-physical production systems (IoT interactions with each other and humans via the internet in real-time) monitor the ongoing physical processes in the factory and make decentralized decisions. 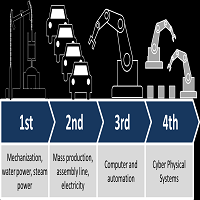 Industrial Revolution began in the 18th century in Great Britain where manufacturing was carried out by water and steam-powered engines, shifting from agrarian market to that of production by manufacturing. In the 19thth century or the second revolution, it was mass production was by division of labor and electrical energy (electric current being discovered in 1831). Thereafter, during Industry 3.0 in the 20th century or the 70s, manufacturing was automated by electronics, advent of computers and IT. It also moved on to a few processes being automated with the help of robots and machines which took the place of workers on the assembly lines and aided in precision. Today, it is the ‘cyber-physical production systems‘ or the amalgamation of physical and virtual worlds.

Industry 4.0 is pushed by systems such as cloud which enhance scalability, flexibility, resource efficiency, customized adjustments with the machine modifying as per the human work cycle, security, logistics, time, sustainability and configuration considerations, and receptiveness. The deployment of such systems in production leads to a ‘smart factory.’ This smart factory’s’ products, processes, and resources deal with adaptability of self, along with complying with issues such as accommodating, learning characteristics, error forbearance and risk management, flexibility and compliance to respond in real time. With the aid of analytics and big data, real-time data is harnessed giving meaningful insights and enabling real-time decisions. As everything is ‘connected,’ automation and personal interaction increases. Sensors control mechanical activities, social media enhances collaboration between mediums inside and outside the organization.

Smart Factory must include

The ‘Smart Factory’ leads to a growth in the supply chain and the production line. Through a much higher level of automation and digitization, there is a superior product which also augments cost efficiency. Also, due to transparency and flexibility, small companies will be able to be competitive at an international level. 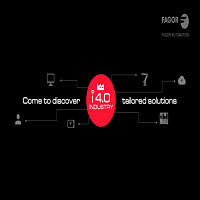 In 2013, a German government’s strategic initiative announced Industrie 4.0 where, with computerization, the manufacturing industry would work without human engagement. Angela Merkel, German chancellor, called Industrie 4.0 as the means to “deal quickly with the fusion of the online world and the world of industrial production.”

Apart from Germany, US in also getting involved in building a smart manufacturing platform to enable manufacturing organizations of all sizes to gain access to technology to tailor their needs. Others corporations following suit are GE, AT&T, Cisco, Intel, Lectra, Bosch, Festo, SAP, TRUMPF, Wittenstein, Accenture etc.

Few more examples: Microsoft Azure, a cloud-based industrial operating system supplies software to a factory for integrating data sensors, cloud gateways etc. into a single network where data and directions can be exchanged between humans and technology (data points).

In contrast, Intel’s Industrial and Energy Solutions goes on to provide the hardware such as cameras, robotic sensors, detectors etc. required in a smart factory which communicate data with respect to maintenance prerequisites, productivity stage, power usage etc. IBM too develops the hardware components of IoT infrastructure required in a manufacturing setup, such as devices which use cognitive API, the virtual currency (Bitcoin) on blockchain technology etc.

There have been concerns cropping up in this system of Industry 4.0 such as data security issues, integrity of the production techniques, loss of jobs due to automation, dependability, permanence, market volatility and high costs related to cyber-physical systems. But the benefits outweigh the concerns. This is especially true in cases where humans work in extremely dangerous environments. If data is available at all stages of the manufacturing process, supply chain can be managed. Using augmented reality and multi-nodal interaction, the industrial assistant structures will aid the workers in understanding the cyber-physical production systems and collaborate via digital social media. This would also lead to easily adaptive products and services as per demand, leading to enhanced productivity – holds beneficial for countries such as India where the ‘Make in India’ drive is making India move towards becoming a hub for manufacturing.

Industry 4.0 is the next massive step in manufacturing/factory production which, when used with technology, is the imminent future of industrial development. It will undoubtedly be the international expression of manufacturing.