Integrated individual behavior model helps in taking a decision in order to perform a task efficiently. It analyzes a person’s intention to act by studying three parameters− Attitudes, Perceived Norms, and Personal Agency. 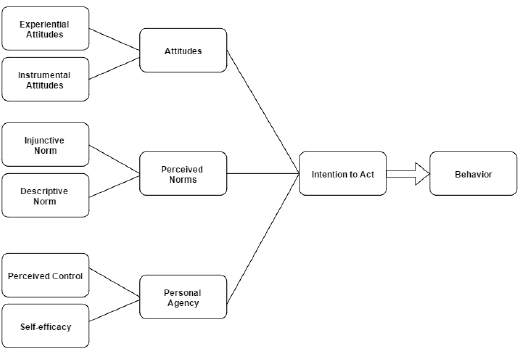 Attitude invokes an individual's overall promising or unpromising perception towards a behavior consisting of affective and cognitive dimensions. Attitude is again of two types −

Experiential attitude (affective attitude) is the emotional reaction of an individual towards the idea of performing the behavior.

Instrumental attitude (cognitive attitude) is determined by the beliefs regarding the results of behavior.

Perceived norm directs towards the social pressure one feels to achieve or abstain from a particular behavior.

Injunctive norm (like the subjective norm) hints to normative beliefs regarding what others think one should do and encouragement to comply.

Descriptive norm indicates to perceptions about what others in one's social or personal connections are up to. They are meant to capture situations where there is strong social identity.

Personal agency hints to individual's ability to originate and direct actions for given purposes. It is divided into two parts −

Self-efficacy is an individual's belief in his/her effectiveness in performing the tasks assigned as well presenting their actual skill.

Perceived control is an individual's perceived amount of control over behavioral conduct. It is resolved by control beliefs. Say for example, an individual's perception of the degree to which various environmental factors make it easy or difficult to perform a behavior.

This is the final model we design by combining all the parts seen earlier. This model concludes that behavior is based upon the decision one makes along with the current information about the situation, behavior, habit and environmental constraints. These are further dependent on attitude, norms and personal agency, and a result of other factors like our beliefs.