The objective of this chapter is to learn all the aspects of design and development of interactive systems, which are now an important part of our lives. The design and usability of these systems leaves an effect on the quality of people’s relationship to technology. Web applications, games, embedded devices, etc., are all a part of this system, which has become an integral part of our lives. Let us now discuss on some major components of this system.

Usability Engineering is a method in the progress of software and systems, which includes user contribution from the inception of the process and assures the effectiveness of the product through the use of a usability requirement and metrics.

It thus refers to the Usability Function features of the entire process of abstracting, implementing & testing hardware and software products. Requirements gathering stage to installation, marketing and testing of products, all fall in this process.

Usability has three components − effectiveness, efficiency and satisfaction, using which, users accomplish their goals in particular environments. Let us look in brief about these components.

The methodical study on the interaction between people, products, and environment based on experimental assessment. Example: Psychology, Behavioral Science, etc.

The scientific evaluation of the stated usability parameters as per the user’s requirements, competences, prospects, safety and satisfaction is known as usability testing.

Acceptance testing also known as User Acceptance Testing (UAT), is a testing procedure that is performed by the users as a final checkpoint before signing off from a vendor. Let us take an example of the handheld barcode scanner.

Let us assume that a supermarket has bought barcode scanners from a vendor. The supermarket gathers a team of counter employees and make them test the device in a mock store setting. By this procedure, the users would determine if the product is acceptable for their needs. It is required that the user acceptance testing "pass" before they receive the final product from the vendor.

A software tool is a programmatic software used to create, maintain, or otherwise support other programs and applications. Some of the commonly used software tools in HCI are as follows −

Software engineering is the study of designing, development and preservation of software. It comes in contact with HCI to make the man and machine interaction more vibrant and interactive.

Let us see the following model in software engineering for interactive designing. 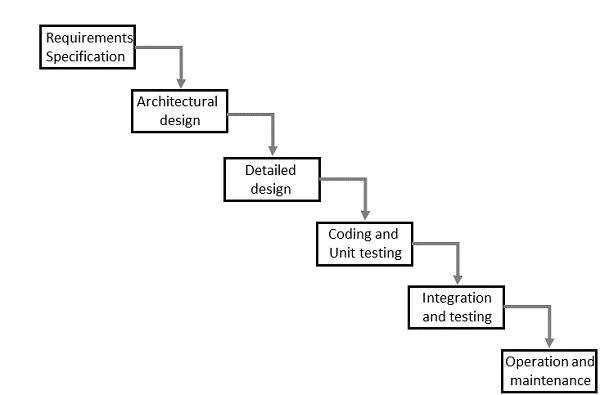 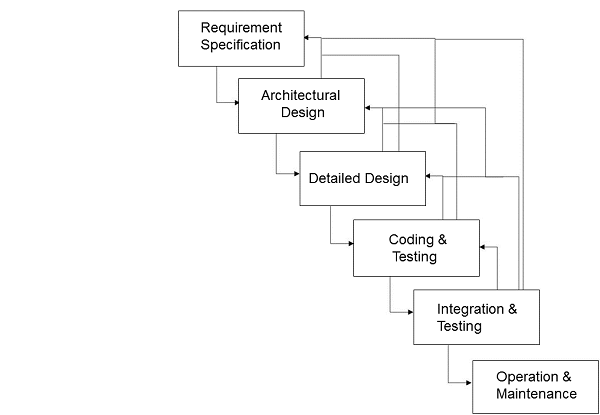 The uni-directional movement of the waterfall model of Software Engineering shows that every phase depends on the preceding phase and not vice-versa. However, this model is not suitable for the interactive system design.

Prototyping is another type of software engineering models that can have a complete range of functionalities of the projected system.

In HCI, prototyping is a trial and partial design that helps users in testing design ideas without executing a complete system.

Example of a prototype can be Sketches. Sketches of interactive design can later be produced into graphical interface. See the following diagram. 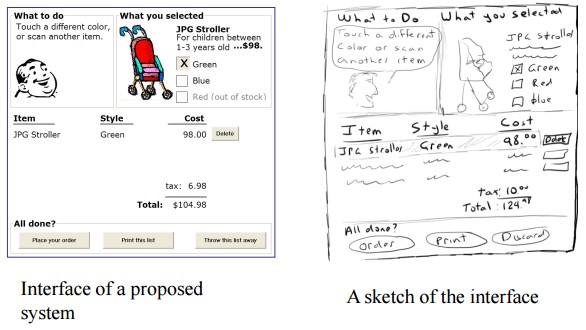 The above diagram can be considered as a Low Fidelity Prototype as it uses manual procedures like sketching in a paper.

A Medium Fidelity Prototype involves some but not all procedures of the system. E.g., first screen of a GUI.

Finally, a Hi Fidelity Prototype simulates all the functionalities of the system in a design. This prototype requires, time, money and work force.

The process of collecting feedback from users to improve the design is known as user centered design or UCD.

The stages in the following diagram are repeated until the solution is reached. 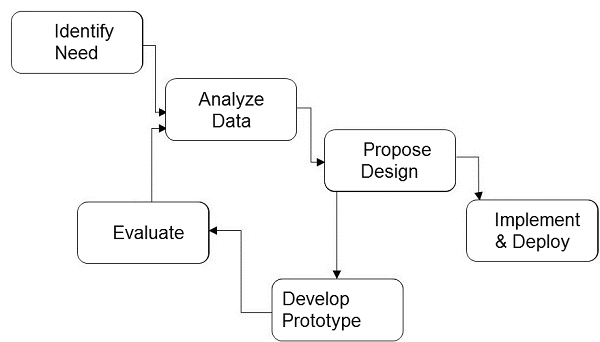 Graphic User Interface (GUI) is the interface from where a user can operate programs, applications or devices in a computer system. This is where the icons, menus, widgets, labels exist for the users to access.

It is significant that everything in the GUI is arranged in a way that is recognizable and pleasing to the eye, which shows the aesthetic sense of the GUI designer. GUI aesthetics provides a character and identity to any product.

For the past couple of years, majority IT companies in India are hiring designers for HCI related activities. Even multi-national companies started hiring for HCI from India as Indian designers have proven their capabilities in architectural, visual and interaction designs. Thus, Indian HCI designers are not only making a mark in the country, but also abroad.

The profession has boomed in the last decade even when the usability has been there forever. And since new products are developed frequently, the durability prognosis also looks great.

As per an estimation made on usability specialists, there are mere 1,000 experts in India. The overall requirement is around 60,000. Out of all the designers working in the country, HCI designers count for approximately 2.77%.

Let us take a known analogy that can be understood by everyone. A film director is a person who with his/her experience can work on script writing, acting, editing, and cinematography. He/She can be considered as the only person accountable for all the creative phases of the film.

Similarly, HCI can be considered as the film director whose job is part creative and part technical. An HCI designer have substantial understanding of all areas of designing. The following diagram depicts the analogy −