A dialog is the construction of interaction between two or more beings or systems. In HCI, a dialog is studied at three levels −

STNs are the most spontaneous, which knows that a dialog fundamentally denotes to a progression from one state of the system to the next.

The syntax of an STN consists of the following two entities − 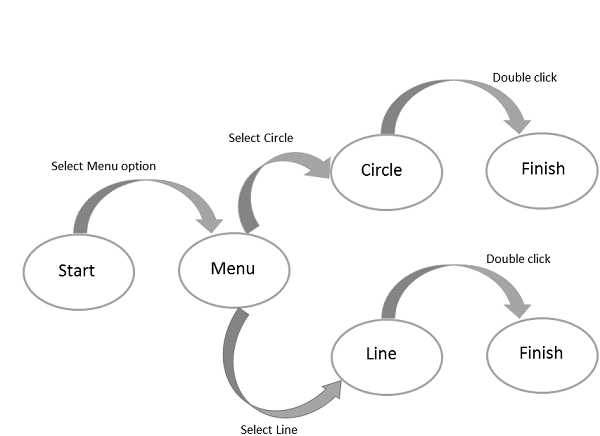 Let us see the StateChart Construction of a machine that dispense bottles on inserting coins. 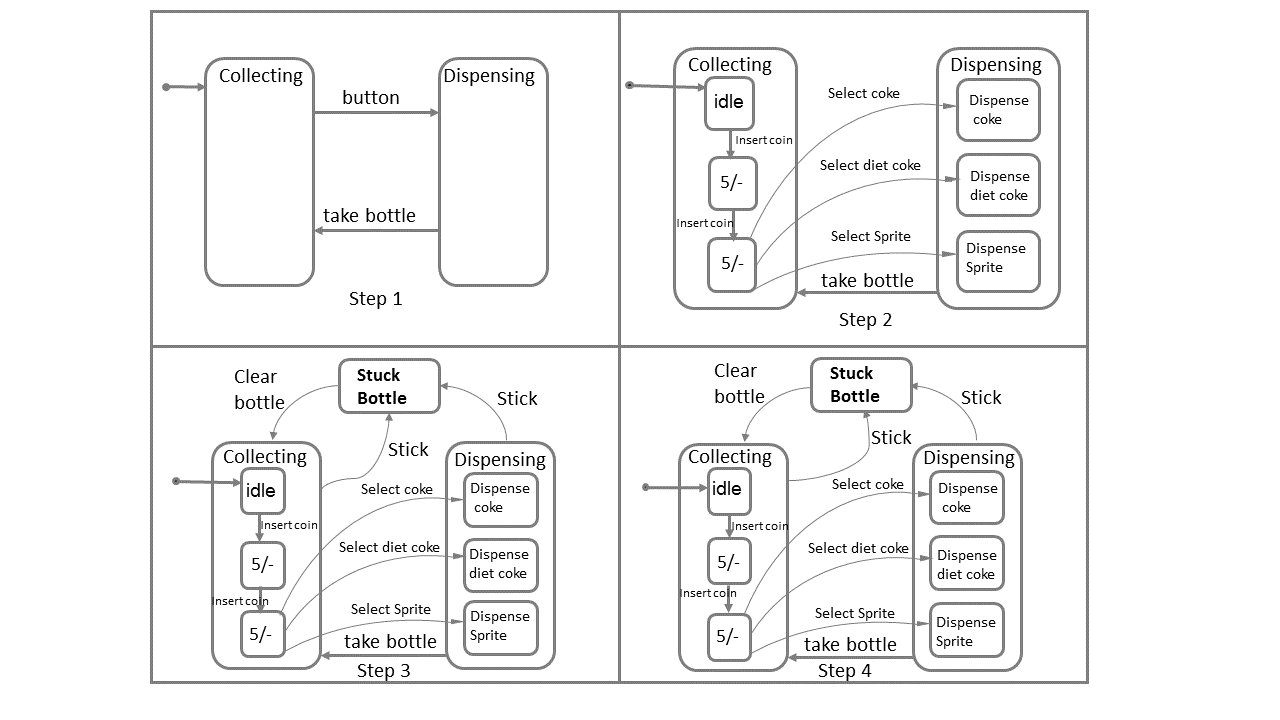 The above diagram explains the entire procedure of a bottle dispensing machine. On pressing the button after inserting coin, the machine will toggle between bottle filling and dispensing modes. When a required request bottle is available, it dispense the bottle. In the background, another procedure runs where any stuck bottle will be cleared. The ‘H’ symbol in Step 4, indicates that a procedure is added to History for future access.

Petri Net is a simple model of active behavior, which has four behavior elements such as − places, transitions, arcs and tokens. Petri Nets provide a graphical explanation for easy understanding.

Visual materials has assisted in the communication process since ages in form of paintings, sketches, maps, diagrams, photographs, etc. In today’s world, with the invention of technology and its further growth, new potentials are offered for visual information such as thinking and reasoning. As per studies, the command of visual thinking in human-computer interaction (HCI) design is still not discovered completely. So, let us learn the theories that support visual thinking in sense-making activities in HCI design.

An initial terminology for talking about visual thinking was discovered that included concepts such as visual immediacy, visual impetus, visual impedance, and visual metaphors, analogies and associations, in the context of information design for the web.

As such, this design process became well suited as a logical and collaborative method during the design process. Let us discuss in brief the concepts individually.

It is a reasoning process that helps in understanding of information in the visual representation. The term is chosen to highlight its time related quality, which also serves as an indicator of how well the reasoning has been facilitated by the design.

Visual impetus is defined as a stimulus that aims at the increase in engagement in the contextual aspects of the representation.

It is perceived as the opposite of visual immediacy as it is a hindrance in the design of the representation. In relation to reasoning, impedance can be expressed as a slower cognition.

The HCI design can be highly benefited with the use of above mentioned concepts. The concepts are pragmatic in supporting the use of visual procedures in HCI, as well as in the design processes.

Direct manipulation has been acclaimed as a good form of interface design, and are well received by users. Such processes use many source to get the input and finally convert them into an output as desired by the user using inbuilt tools and programs.

“Directness” has been considered as a phenomena that contributes majorly to the manipulation programming. It has the following two aspects.

Distance is an interface that decides the gulfs between a user’s goal and the level of explanation delivered by the systems, with which the user deals. These are referred to as the Gulf of Execution and the Gulf of Evaluation.

The Gulf of Execution

The Gulf of Execution defines the gap/gulf between a user's goal and the device to implement that goal. One of the principal objective of Usability is to diminish this gap by removing barriers and follow steps to minimize the user’s distraction from the intended task that would prevent the flow of the work.

The Gulf of Evaluation

The Gulf of Evaluation is the representation of expectations that the user has interpreted from the system in a design. As per Donald Norman, The gulf is small when the system provides information about its state in a form that is easy to get, is easy to interpret, and matches the way the person thinks of the system.

It is described as a programming where the design directly takes care of the controls of the objects presented by the user and makes a system less difficult to use.

The scrutiny of the execution and evaluation process illuminates the efforts in using a system. It also gives the ways to minimize the mental effort required to use a system.

Guidelines for consistency should be defined for the following components −

Users must be familiar with −