How are the weather add ons changing the virtual reality experience

Virtual reality (VR) is all about hanging our suspicion and allowing our attention to imagine a different virtual world for experiencing thoughts. VR has taken our experience in movie and gaming to the next level. Now, VR has marked its presence into weather sensation too. It’s really fascinating to experience the presence of new weather add-ons.

A Brief Overview on VR

Virtual reality is an attempt to mimic the real world environment through a digital touch. The custom software produces lifelike images, vibrations, echoes, noises and other such impressions that replicate a real environment. A viewer using a VR device is typically able to glance through the computer generated world, travel inside it and interact with topographies or features that are illustrated on a screen. 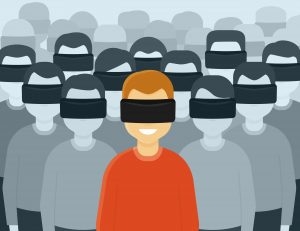 Some segments of Virtual reality concepts with augmented reality (AR) as well. AR is just like VR technology that amalgamates what the viewer observes in their existing surroundings with alphanumeric content created by computer software. The technology not only creates a virtual world but let you feel the reality by manipulating your body senses.

A Flash back on its “making-off”

From the beginning of twentieth century, science fiction stories have always encouraged tech freaks to build a device which would be based on experiencing virtual reality on digital platform. In 1935 Stanley G. Weinbum wrote a short story on VR and named it “Pygmalion’s spectacles”. The story was based on holographic recording of fictional experiences that includes smell and touch.

Writer Morton Heilig, tried to draw the viewer into the onscreen activity by surrounding all the senses in an operative manner. to make it more clear to public, he wrote a book named “Experience Theatre” in 1950. A prototype of his vision was built and dubbed as ‘Sensorama’ as well.

Development in the field of VR

In 1978 Massachusetts institute of technology (MIT) has created ‘Aspen Movie Map’ which was considered as a major development in the field of Hypermedia and virtual reality. The reason behind, it contained the basic virtual recreation of Aspen city of Colorado.

In this map, viewers could wonder in the streets in three seasonal based modes; summer, winter and polygons. All these are based on photographs. For first two modes, researchers actually photographed the city in various interesting angles and the third one was a basic three dimensional model bearing a greater level of interest.

How Atari Corporation Started it All

To avail a VR device for American citizen, it was Atari Corporation who founded a laboratory but it was closed due to some fatal accident. Next was the VPL Research in 1985 which was founded by some ex-employees of Atari. VPL research contributed in a great way towards VR development but despite of having strong potential, it didn’t get noticeable neither it got any media coverage.

Initially it was liked by only cyberpunks; in US, the cyberpunks were used to be those people who viewed technology as only source to change the society for betterment of human being. But gradually movies like ‘Brainstorm’ and ‘Lawnmower Man’ created a buzz and the popularity started to rise. That resulted in the manufacturing of VR headsets in big numbers too. Finally, in 1991 SEGA introduced Sega VR headset for Arcade games which actually give an up thrust to VR market.

To make the effects and observations of a VR more real, researchers have now added a new feature called weather add-on. Until now, the digital world of VR was not successful on fooling our body senses though they are successful fooling our eyes and ears but this new addition is going to take care of that as well. 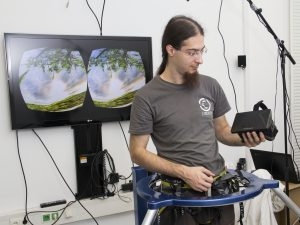 Through weather add-on, one can feel the beating sun while roaming in a virtual desert or can even feel the cool air on entering into a thunder environment, the absence of which in the earlier versions was creating a void. On this, the lead developers told that now, it is going to be a heavy sweating for a person playing football, just like reality.

All the above said are going to be facilitated with the integration of heat sensors and additional small fans on the device. As a VR heardset is sensor monitored, all effects will be manipulated according to the environment selected by the viewer. However, the makers have assured on the nil side effects of any of these on the health.

In the segment ‘new technology in VR’ it has been mentioned that to make effects and observations of a VR device more real, new sensing technology related to heat and wind effects are added. From commercial point of view, it is simply a cherry on the cake, as these special weather add-ons like wind and sun, can give you a thrilling experience about the virtual world if you will play games like ‘Call of Duty’.

The feeling of atmospheric changes are not limited to games only, rather movie watchers too can cherish of experiencing true environment. Makers are further experimenting on more realising the special effects of movies, which is even going up the ‘joy of watching’ to another level. This new feature is specifically designed to up the interest among curious “never used before” buyers and will compel old fans to upgrade their old handsets with new ones, a smart marketing move, isn’t it?

Developers behind the Scene

The concept of weather add-on and making a VR device more popular has been shaped by Nimesha Ranasinghe. He has been working on the project for quite a few months. The newly developed VR headset has got fans attached to its front end and few heating elements are located at the rear end. 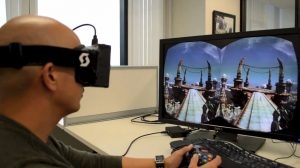 Nimesha Ranasinghe and his group, who belong to National University of Singapore, have named this device as Ambiotherm. Nimesha Ranasinghe has mentioned that the project is at its initial stage and is going to pass through some tests before getting a final nod.

Reasons behind placing fans and heating elements at a specific position

It is already mentioned that fans are placed in front of user’s face and heating elements are positioned on the neck part of body. Developers have designed the device in such a way because in the head part of our body, the face identifies wind more than any other part.

After unveiling the new design, the developers were intrigued with many curious questions from the users, most common being the placement of heat sensors and fans. Explaining the same, they told, a face able to identify more winds thus zeroed the placement of fans on the front side. Similarly, being extremely sensitive to temperature changes heat sensors are placed on backside.

Science is advancing day by day and so does the VR industry. Developers are now devoting and having a vision to make the life of people more exciting. Nimesha Ranasinghe and his team in Singapore National University has also showed on how electrodes can be used to add sweet taste into virtual reality and this time, they just added another feather to the cap.

The team is now further investigating on augmenting the human emotion with the use of multisensory VR. The team also forecasted the presence of future experiments on smell and taste already on cards. If sources are to be believed, the latest discovery on ambiotherm is going to have its first public look at the Conference of Human Factors in computing systems which is going to be held in Colorado in May.