A graph is a diagram of points and lines connected to the points. It has at least one line joining a set of two vertices with no vertex connecting itself. The concept of graphs in graph theory stands up on some basic terms such as point, line, vertex, edge, degree of vertices, properties of graphs, etc. Here, in this chapter, we will cover these fundamentals of graph theory.

A point is a particular position in a one-dimensional, two-dimensional, or three-dimensional space. For better understanding, a point can be denoted by an alphabet. It can be represented with a dot.

A Line is a connection between two points. It can be represented with a solid line.

Here, ‘a’ and ‘b’ are the points. The link between these two points is called a line.

A vertex is a point where multiple lines meet. It is also called a node. Similar to points, a vertex is also denoted by an alphabet.

Here, the vertex is named with an alphabet ‘a’.

An edge is the mathematical term for a line that connects two vertices. Many edges can be formed from a single vertex. Without a vertex, an edge cannot be formed. There must be a starting vertex and an ending vertex for an edge.

Here, ‘a’ and ‘b’ are the two vertices and the link between them is called an edge. 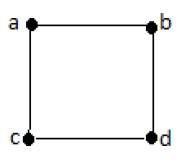 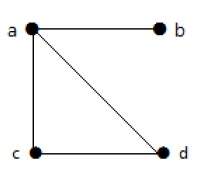 In a graph, if an edge is drawn from vertex to itself, it is called a loop.

In the above graph, V is a vertex for which it has an edge (V, V) forming a loop.

In this graph, there are two loops which are formed at vertex a, and vertex b.