Government accounting is a scientific procedure of collecting, classifying, recording, summarizing, and interpreting all the financial transactions including revenues and expenditures of all the government offices. It keeps the record of public funds.

Followings are the main objectives of the Government Accounting −

Difference between Government and Commercial Accounting

Following are the important terms and expressions used in Government accounting −

Let’s discuss each of them succinctly −

“All revenues received by the Government by way of taxes like Income Tax, Central Excise, Customs and other receipts flowing to the Government in connection with the conduct of Government business i.e. Non-Tax Revenues are credited into the Consolidated Fund constituted. Similarly, all loans raised by the Government by issue of Public notifications, treasury bills (internal debt) and loans obtained from foreign governments and international institutions (external debt) are credited into this fund. All expenditure of the government is incurred from this fund and no amount can be withdrawn from the Fund without authorization from the Parliament.”

As per the Article 267 of the Indian Constitution −

“The Contingency Fund of India records the transactions connected with Contingency Fund set by the Government of India. The corpus of this fund is Rs. 50 crores. Advances from the fund are made for the purposes of meeting unforeseen expenditure which are resumed to the Fund to the full extent as soon as Parliament authorizes additional expenditure. Thus, this fund acts more or less like an imprest account of Government of India and is held on behalf of President by the Secretary to the Government of India, Ministry of Finance, and Department of Economic Affairs.”

The Public Account is constituted under Clause 2 of Article 267 of the Indian Constitution, which says −

“The transactions relate to debt other than those included in the Consolidated Fund of India. The transactions under Debt, Deposits and Advances in this part are those in respect of which Government incurs a liability to repay the money received or has a claim to recover the amounts paid. The transactions relating to ‘Remittance’ and `Suspense’ shall embrace all adjusting heads. The initial debits or credits to these heads will be cleared eventually by corresponding receipts or payments. The receipts under Public Account do not constitute normal receipts of Government. Parliamentary authorization for payments from the Public Account is therefore not required.”

Similarly, all 29 states of India has the same structure as described above.

The general structure of the government accounts is illustrated below − 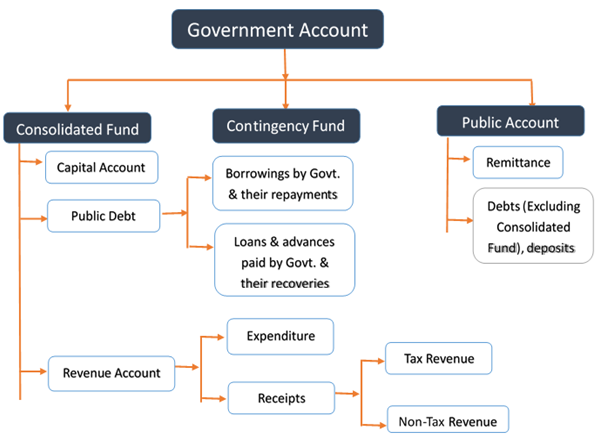 Treasury and other government departments, initially compile their receipt and payment accounts on monthly basis for central government and state government separately and then send to respective Accountant General of India.

Collection of revenue and disbursement are directly made by Railway, Defense, Post & Telegraphs, Forest, and public departments and lump sum payments are made by treasury through the departmental officers. Detail of accounts on monthly basis is maintained by the departmental Accounts officers.

Monthly accounts submitted by the treasury and account officer are compiled by the Accountant General, for the central government as a whole and for each state separately. The compiled report shows progressive figure of each month from 1st April to 31st March of every year. Complied accounts along with appropriation accounts are submitted by Comptroller and Auditor General of India to the President of India, to the Governor of each state, or to the Administrator of the Union Territory accordingly.

Comptroller and Audit General (CAG) is an independent Constitutional body. Special status has been given to safeguard his independence and enable him to discharge his duty without fear or favor.

As per the Article 148 of the Constitution of India, the comptroller and Auditor-General will be appointed by the President of India. The provision of removal of CAG is the same as of the judges of the Supreme Court. He can be removed only on the basis of proven misbehavior or incapacity.

As per the Article 150 of the Constitution of India — the accounts of the Union and of the States shall be kept in such form as the President may prescribed, on the advice of the Comptroller & Auditor General.

Article 151 of the Constitution provides that the audit reports of the Comptroller & Auditor General relating to the accounts of the Union shall be submitted to the President, who shall cause them to be laid before each House of Parliament.