Explain about the Time stamp ordering protocol in DBMS

The timestamp-ordering protocol ensures serializability among transactions in their conflicting read and write operations. This is the responsibility of the protocol system that the conflicting pair of tasks should be executed according to the timestamp values of the transactions.

Otherwise, the transaction requesting read/write is restarted and gives a new timestamp. Here no locks are used so no deadlock.

These timestamps are updated after a successful read/write operation on data item X.

Rules for a transaction

Rule 1 − If a transaction Ti issues a read(X) operation.

Rule 2 − If a transaction Ti issues a write(X) operation.

Operation rejected and Ti rolled back.

Otherwise, the operation is executed.

This rule states if TS(Ti) < W-timestamp(X), then the operation is rejected and Ti is rolled back.

Time-stamp ordering rules can be modified to make the schedule view serializable.

Instead of making Ti rolled back, the 'write' operation itself is ignored. 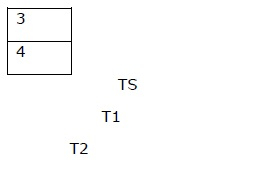