Excel stores the macros as Excel VBA (Visual Basic for Applications) code. After recording a macro, you can view the code that is generated, modify it, copy a part of it, etc. You can even write a macro code yourself if you are comfortable with programming in VBA.

Developer Tab on the Ribbon

You can access macro code in VBA from the Developer tab on the Ribbon.

If you do not find the Developer tab on the Ribbon, you need to add it as follows − 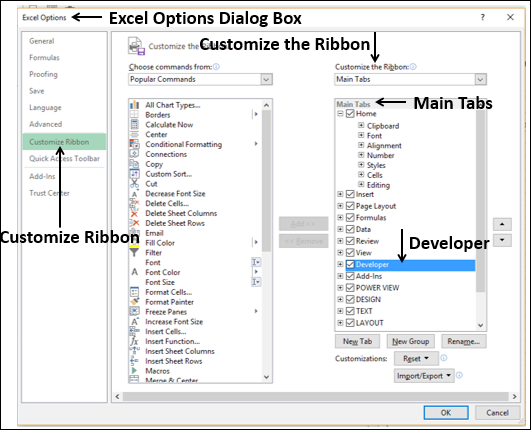 You need to know the commands that are for macros under the developer tab.

Click the DEVELOPER tab on the Ribbon. The following commands are available in the Code group −

You have already learnt the commands other than VBA Editor in the previous chapters.

VBA Editor or VBE is the developer platform for VBA in Excel.

Open the workbook – MyFirstMacro.xlsm that you saved earlier in the chapter – Creating a Simple Macro, in this tutorial.

You can open the VBE in any of the two ways −

Option 1 − Click Visual Basic in the Code group under the Developer tab on the Ribbon.

VBE appears in a new window.

The name of your Excel macro enabled workbook name appears with the prefix – Microsoft Visual Basic for Applications.

You will find the following in the VBE −

Project Explorer is where you find the VBA project names. Under a project, you will find Sheet names and Module names. When you click a module name, the corresponding code appears on the right side in a window.

The code of a macro will be stored in a module in VBA. When you select a macro and click Edit, the code of the macro appears in the corresponding module window.