For many years, companies have been using computers to send business documents instead of mailing paper documents. But the problem arises when Company A won’t recognize e-format of Company B due to the absence of a standard format which led to the condition where computers could no longer “talk” to one another and again a great deal of effort by programmers need to put which led the cost.

In 1979 the American National Standards Institute (ANSI) formed the Accredited Standards Committee (ASC) X12 to rectify this situation. This committee was to standardize the format of electronic documents to allow for easy movement of information between computers.

EDI (Electronic Data Interchange) is a standard format for computer-to-computer exchange of business documents between companies.

EDI is based on the use of message standards, ensuring that all participants use a common language. A message standard consists of uniform formats for business documents, which have been adopted for electronic transmission purposes. It also includes security and control elements and other rules and conventions relating to the use of transaction sets that all users agree to follow. 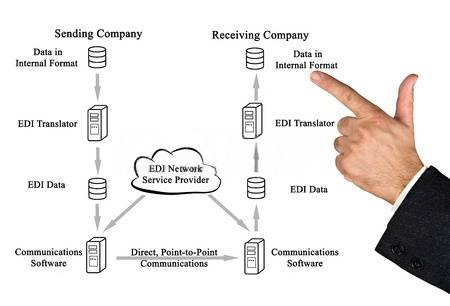 EDI can be transmitted using any methodology agreed to by the sender and recipient.

This includes a variety of technologies, including modem (asynchronous and synchronous), FTP, e-mail, HTTP, AS1, AS2, etc.

Some Major Sets of EDI Standards

The outbound process includes, generating and sending of EDI files.

Below are the steps of an outbound process.

Some common methods of transmission are FTP, HTTP and AS2.

The inbound process is the receiving and translating of EDI files.

Below are the steps of an inbound process. 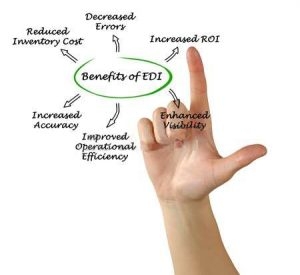 Economy: Research has consistently shown that EDI costs only one third of its paper-based equivalent. Expenses associated with paper, printing, reproduction, storage, filing, postage and document retrieval are all reduced or eliminated when we switch to EDI transactions.

Speed: Information moving between computers moves more rapidly, and with little or no human intervention.EDI can speed up our business cycles by 61%.it can reduce the order-to-cash cycle time by more than 20%, improving business partner transactions and relationships. Transactions that used to take 5 days by paper can be completed in under an hour.

Accuracy: Information that passes directly between computers without having to be re-entered eliminates the chance of data entry errors. There is almost no chance that the receiving computer will invert digits or add an extra digit. Improves data quality, delivering at least a 30—40% reduction in transactions with errors by eliminating errors from illegible handwriting, lost faxes/mail and keying and re-keying errors.

Efficiency: Automating paper-based tasks allows our staff to concentrate on higher-value tasks and provides them with the tools to be more productive. Shortening the order processing and delivery times means that organizations can reduce their inventory levels. Research reports as much as a 50% savings on human resources from the use of EDI.

Strategic Business Level: Enables real-time visibility into transaction status. This in turn enables faster decision-making and improved responsiveness to changing customer and market demands, and allows businesses to adopt a demand-driven business model rather than a supply-driven one. Shortens the lead times for product enhancements and new product delivery.