It has the possible output for every combination of state, input character and stack character, as compared to the deterministic finite automata (DFA).

We need to be careful about every combination of state and stack character. Only one of the transactions is allowed either for the empty symbol ∧ or for an input symbol. Or there can be no transaction at all.

A non-deterministic push-down automaton (NPDA) can contain the following instructions, but a DPDA cannot have these instructions.

This was an example of a NPDA, because from state 0, it branches, either loading another letter on or trying to take letters off. This could only be done non-deterministically.

A DPDA would need to know when to start removing letters from the stack. Thus an NPDA can recognise the language of the even palindromes, but a DPDA cannot.

DPDAs recognise the regular languages and also some which are not regular, but not all of the context free languages.

The diagram given below depicts the difference between DPDA and NPDA, when it comes to recognising regular languages and context free grammar − 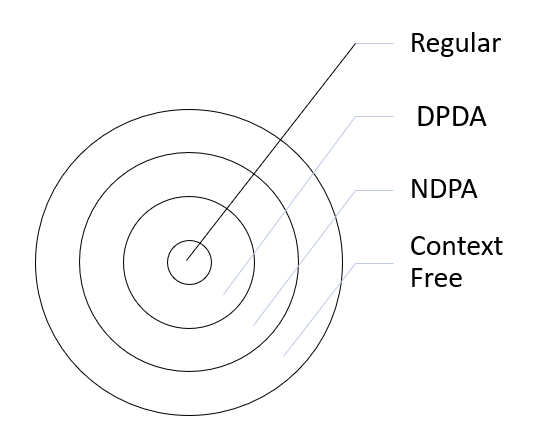