What are byte stuffing and bit stuffing?

Byte stuffing is a mechanism to convert a message formed of a sequence of bytes that may contain reserved values such as frame delimiter, into another byte sequence that does not contain the reserved values.

Bit stuffing is the mechanism of inserting one or more non-information bits into a message to be transmitted, to break up the message sequence, for synchronization purpose.

In Data Link layer, the stream of bits from physical layer are divided into data frames. The data frames can be of fixed length or variable length. In variable - length framing, the size of each frame to be transmitted may be different. So, a pattern of bits is used as a delimiter to mark the end of one frame and the beginning of the next frame. However, if the pattern occurs in the message, then mechanisms needs to be incorporated so that this situation is avoided.

A data link frame has the following parts −

Here, the delimiting flag sequence generally contains six or more consecutive 1s. Most protocols use the 8-bit pattern 01111110 as flag. In order to differentiate the message from the flag in case of same sequence, a single bit is stuffed in the message. Whenever a 0 bit is followed by five consecutive 1bits in the message, an extra 0 bit is stuffed at the end of the five 1s. When the receiver receives the message, it removes the stuffed 0s after each sequence of five 1s. The un-stuffed message is then sent to the upper layers. 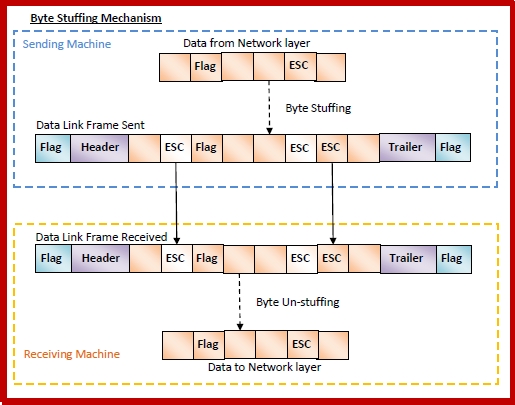 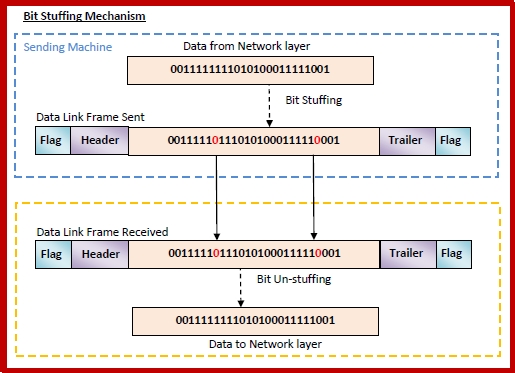