Basically a push down automata (PDA) is as follows −

PDA has three components, which are as follows −

A PDA can be formally described as seven tuples

Construct a non-deterministic PDA (NPDA) for accepting the language

The strings which are generated by this language are −

The language counts the number of a’s followed by a double number of b’s.

Step 2 − Construct a stack along with the state diagram.

Step 3 − The count of a’s and b’s is maintained by the stack.

Step 5 − We will take 2 stack alphabets:

Construction of PDA for the given problem

The PDA is as follows −

The transition functions for the PDA are as follows − 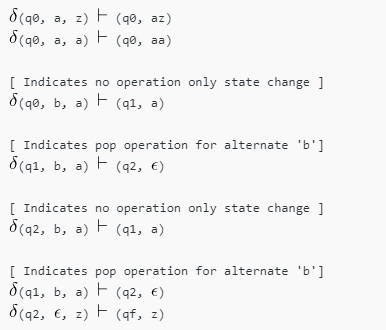 Design a NPDA, when ‘a’ comes before b then push it in stack and if again ‘a’ comes again push it. Also, when ‘b’ comes then pop one ‘a’ from the stack.

But we do this popping operation for alternate positions of b’s, (for two b’s we pop one ‘a’ and for four b’s we pop two ‘a’).

Finally, at the end if the stack becomes empty then we can say that the string is accepted by the PDA.