Construct DFA for strings not ending with "THE"

A Deterministic Finite automaton (DFA) is a five tuples

Accept Strings which are not ending with "THE"

Let the initial state is q0 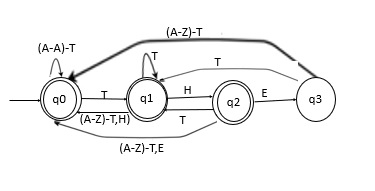 Let’s take a variable named DFA which will be initially 0.

Whenever a transition is there, it will update the value of DFA with the number associated with the new state.