Chef works on a three-tier client server model wherein the working units such as cookbooks are developed on the Chef workstation. From the command line utilities such as knife, they are uploaded to the Chef server and all the nodes which are present in the architecture are registered with the Chef server. 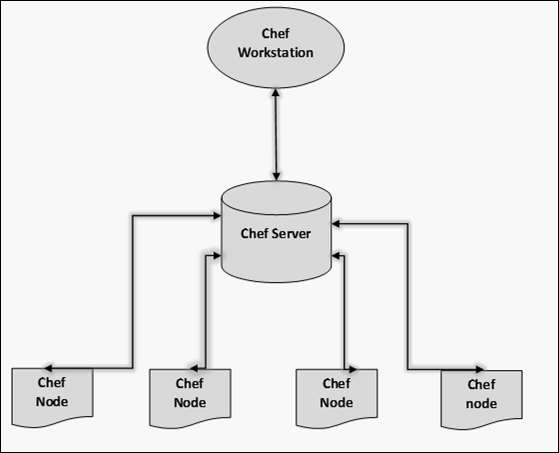 In order to get the working Chef infrastructure in place, we need to set up multiple things in sequence.

In the above setup, we have the following components.

This is the location where all the configurations are developed. Chef workstation is installed on the local machine. Detailed configuration structure is discussed in the later chapters of this tutorial.

This works as a centralized working unit of Chef setup, where all the configuration files are uploaded post development. There are different kinds of Chef server, some are hosted Chef server whereas some are built-in premise.

They are the actual machines which are going to be managed by the Chef server. All the nodes can have different kinds of setup as per requirement. Chef client is the key component of all the nodes, which helps in setting up the communication between the Chef server and Chef node. The other components of Chef node is Ohai, which helps in getting the current state of any node at a given point of time.