Normally, the first step in time series analysis is to plot the series, this is normally done with a line chart.

The most common application of time series analysis is forecasting future values of a numeric value using the temporal structure of the data. This means, the available observations are used to predict values from the future.

The AR(p) is read as an autoregressive model of order p. Mathematically it is written as −

where {φ1, …, φp} are parameters to be estimated, c is a constant, and the random variable εt represents the white noise. Some constraints are necessary on the values of the parameters so that the model remains stationary.

We can see that the ARMA(p, q) model is a combination of AR(p) and MA(q) models.

To give some intuition of the model consider that the AR part of the equation seeks to estimate parameters for Xt − i observations of in order to predict the value of the variable in Xt. It is in the end a weighted average of the past values. The MA section uses the same approach but with the error of previous observations, εt − i. So in the end, the result of the model is a weighted average.

The following code snippet demonstrates how to implement an ARMA(p, q) in R.

Plotting the data is normally the first step to find out if there is a temporal structure in the data. We can see from the plot that there are strong spikes at the end of each year. 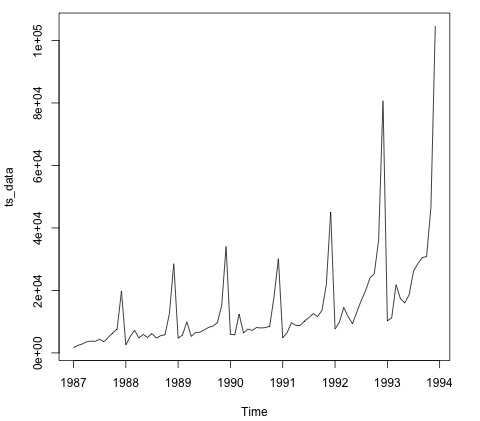 The following code fits an ARMA model to the data. It runs several combinations of models and selects the one that has less error.