Cucumber is a tool that supports Executable specifications, Test automation, and Living documentation.

The key features of executable specifications are as follows −

Cucumber helps with this process since it ties together the executable specifications with the actual code of the system and the automated acceptance tests.

The way it does this is actually designed to get the customers and developers working together. When an acceptance test passes, it means that the specification of the behavior of the system that it represents has been implemented correctly.

From this example, we can see that −

The specification is written in a natural language in a plain text file, but it is executable.

Cucumber is a command line tool that processes text files containing the features looking for scenarios that can be executed against your system. Let us understand how Cucumber works.

In Cucumber, Features, Scenarios, and Steps are written in a Language called Gherkin.

Gherkin is plain-text English (or one of 60+ other languages) with a structure. Gherkin is easy to learn and its structure allows you to write examples in a concise manner.

The key to Cucumber is the mapping between Steps and Step Definitions. 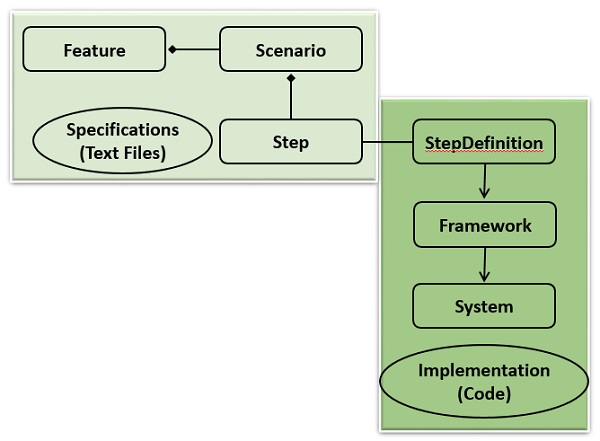 Given below are Cucumber implementations.

Given below are Framework implementations.