Bandel Church is one of the oldest churches in India and is also known as Basilica of the Holy Rosary. The church was built in 1599 to commemorate the settlement of Portuguese in West Bengal. The church is dedicated to Mary, mother of Jesus Christ. She is also known as Our Lady of the Rosary and that’s why the church got the name. 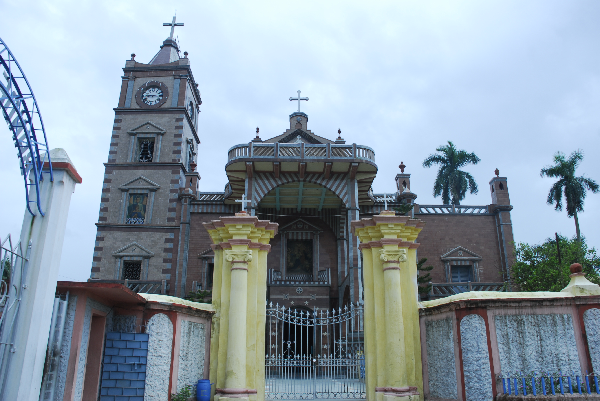 Bandel town was established by Portuguese and it is situated in the Indian state of West Bengal. The name Bandel means port. The town comes under Hooghly district. Portuguese built a church and a monastery in 1660. There is a Dunlop factory nearby Bandel which is situated at a place called Sahaganj. The town is 40 km away from Howrah railway station and is connected to many places through road and rail transport. 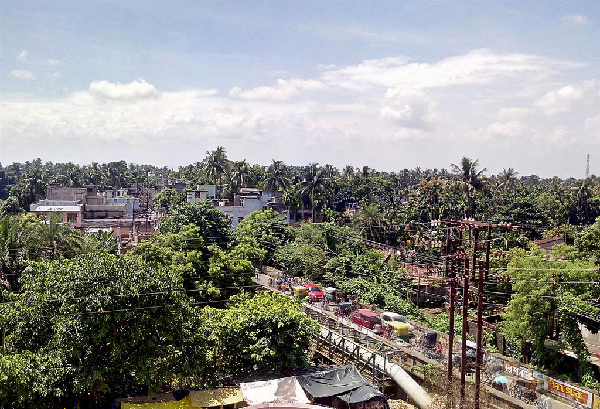 Bandel Church can be visited from 6:00am to 6:00pm. It takes around two to three hours to visit the church as there are many things to visit in and around the church. The church is opened on all days including the public holidays.

Bandel is situated nearby Hooghly river and the best time to visit the place is during winter months. In the rest of the period, the climate is either hot or is hot and humid. The period between 25th December and 10th January are very busy and people may face parking issue. On 25th December the church is closed for the tourists as Christians have to perform many rituals.

There are very few hotels in and nearby Bandel but there are more than 800 hotels in Kolkata which is around 40km from Bandel. Some of the hotels nearby Bandel are as follows −

Some of the hotels in Kolkata are as follows

Bandel Church was constructed in Bandel by the Portuguese after their settlement on the banks of Hooghly river. The first man to arrive from Portugal was Vasco da Gama in 1498. The Portuguese were of the barbaric nature and did business through might and force. 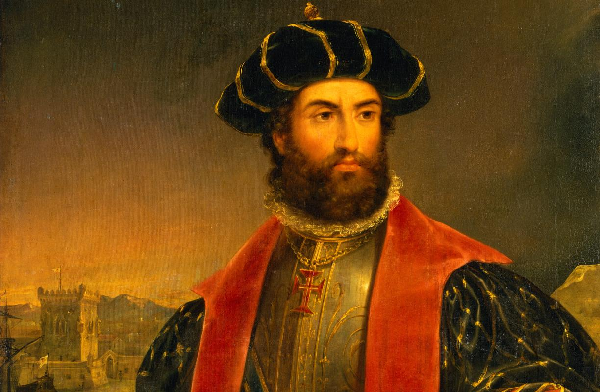 Arrival of Portuguese in Bengal

In 1535, Portuguese arrived in Bengal and started their trade from Saptagram which was situated on the banks of Saraswati river. In 1575, Mughal emperor Akbar allowed them to settle near Hooghly river. Meanwhile, river Saraswati dried up due to silting so the Portuguese started trading from there new settlement at Hooghly.

Priests of Portuguese also arrived in India and began to preach Christianity after getting permission from Akbar. This led to increase in the followers of Christianity which further led to the construction of a church in Bandel in 1599. The church was named as Church of the Holy Rosary. Bandel church was declared as Basilica by Pope II in 1988.

History of the Church

Portuguese became barbaric by the end of 16th century. They started robbing others and also sold women and children as slaves. When Mughal Emperor Shah Jahan came to know about this, he attacked the Hooghly port by sending an army under the command of Qasim Khan Juvayni Nawab. There were five priests out of which four were killed. 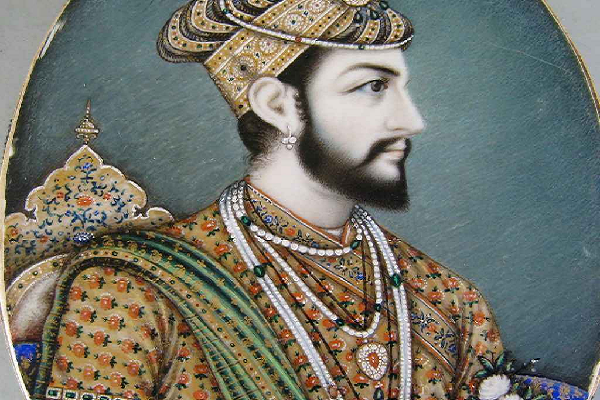 Tiago tried to carry the statue of Mother Mary but could not succeed and the statue sank in the river. The church was also destroyed in the attack. The fifth priest Joan da Cruz was captured and was taken as prisoner along with his followers.

Death sentence was given to them as punishment in which they have to be trampled below the feet of the elephants but one elephant raised the priest and put him on his back which amazed the emperor. So he freed the priest and the prisoners and sent them back to Hooghly. He also gave 311 acres of land to rebuild the church which was built in 1660.

The church size is very small when compared to the other churches of Bengal but still it’s visited by many people from India and abroad. There are many things that can be visited in the church.

There was a ship mast which was installed by a captain after his ship was saved from a storm. The ship mast was damaged when a tree feel down on it in 2010 due to a storm. After the storm, renovation has been done and the mast was kept in a glass enclosure. 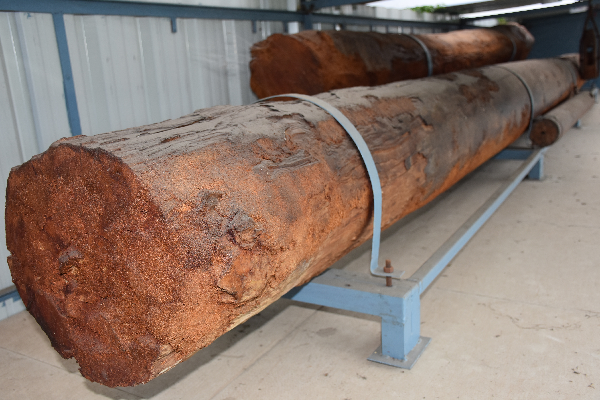 People of all communities are allowed to visit the church during the visiting hours. They can spend the time inside the church without making any noise. Photography is not allowed in the church. There are many paintings inside the main church which tell about the life history of Jesus Christ. The statue of Mother Mary is also there inside the church.

There is a courtyard in front of a structure that resembles a cave. There is a fountain at centre of the cave. Some people light candles here and pray while some drop coins inside the fountain and ask for a wish to be fulfilled. There are stairs in the courtyard that lead to the main church. 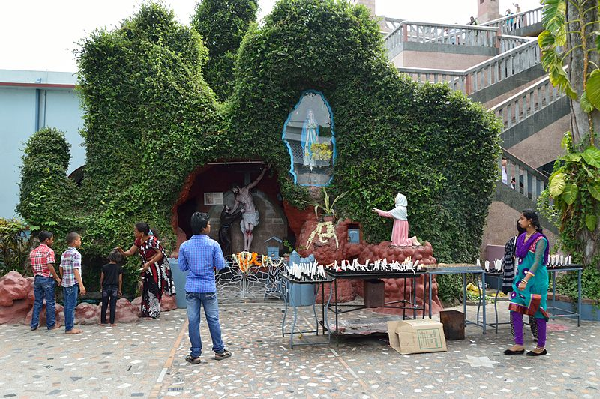 Interior of the Church

The church has beautiful chandeliers inside along with coloured glass windows. The grand tower clock is another thing in the church to be seen. The devotees and the tourists can also find statue of Mother Mary, also known as Lady of Happy Voyage. People worship the statue with devotion.

Bandel Church - How to Reach?

Bandel is well-connected to major cities of India through railway network but there is no airport. Bus for short distance are available but for long routes there are no buses. Kolkata is the nearest bus stand and airport from Bandel. 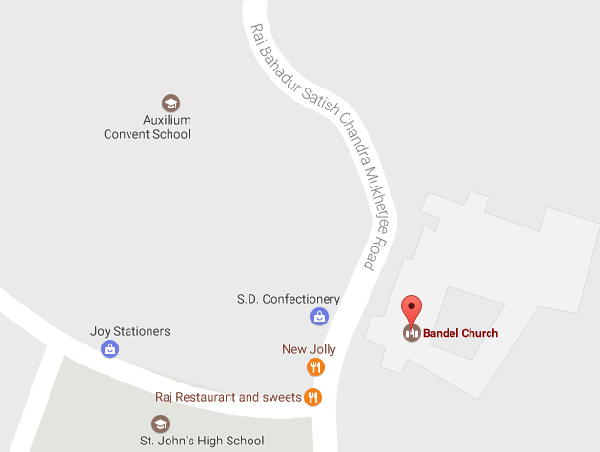 Bandel does not have airport but the nearest airport is Netaji Subhash Chandra Bose Airport at Kolkata which is around 40km from Bandel. The airport was previously known as Dum Dum Airport. It is an international airport and people can travel within India and to abroad from this airport. 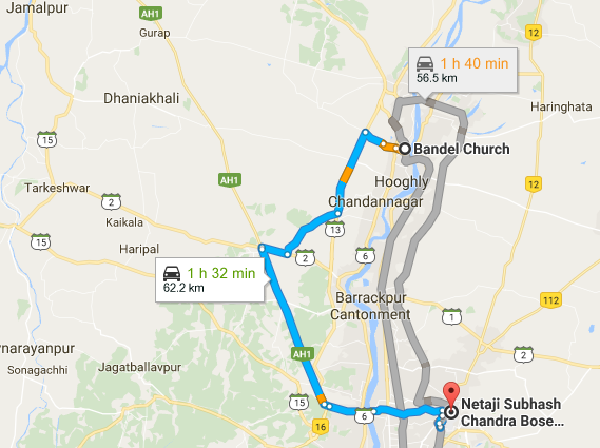 Bandel is connected to many major cities of India through rail network. Many long and short-distance trains have stoppage here. Rajdhani, Shatabdi, Gharib Rath and other premium trains do not stop here. 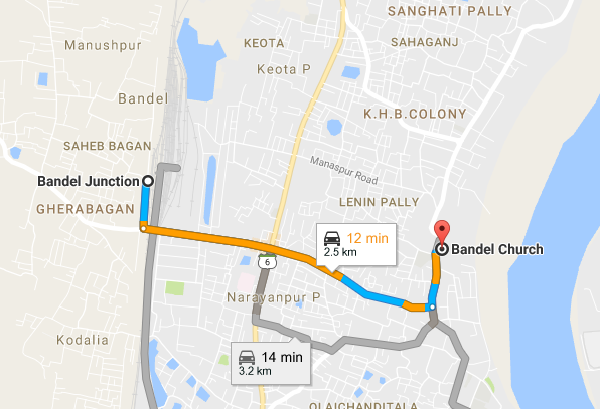 Bandel does not have facility of local transport but people can come here from Kolkata by local trains, local buses, taxis, and metro. Besides this, some long distance trains and buses also stop here. People can hire a taxi from an agency in Kolkata and move in and around Bandel.

Bandel church is very popular tourist place which the people like to visit. The place is visited by the tourists from India and abroad. Besides the church, there are many other places nearby which the tourists can visit. Some of these places are discussed here.

Hooghly Imambara was built by Haji Mohammad Mohsin. The monument is situated on the banks of river Ganga in Chinsurah. It took around 20 years to build the monument as the construction was started in 1841 and completed in 1861. There are many rooms in the two-storeyed building along with a wide entrance. 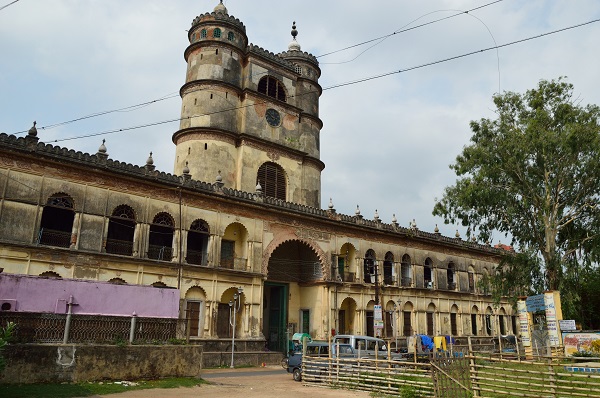 There are two towers at the main gate and a clock tower in their middle. On one side of the monument, there is a mosque and on the other side there are graves of Mohammad Mohsin and his relatives.

Tarakeshwar temple was built in 1729 at Hooghly. It is dedicated to Lord Shiva who is worshipped as Taraknath. The architecture of the temple is based on Bengal temple architecture. The temple is visited all the year round and especially on Mondays. Other occasions on which the temple is most visited is Shivratri and Gajan. 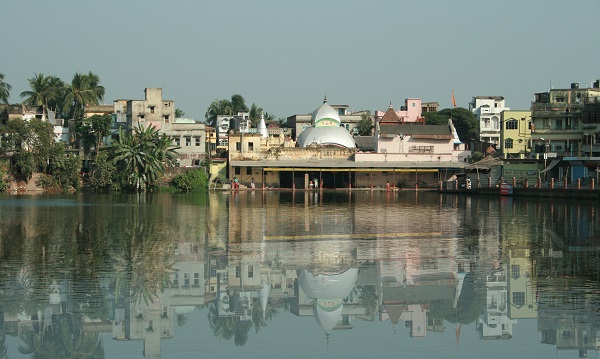 Hangseswari temple was constructed in 19th century and is located in Bansberia in Hooghly. The temple has the height of 21m and there are 13 towers inside the temple having a lotus-shaped top. The temple is dedicated Goddess Hangseswari. Ananta Basudeba Temple is within the precincts of the Hangseswari Temple while Swanbhaba Kali Temple is nearby the temple. 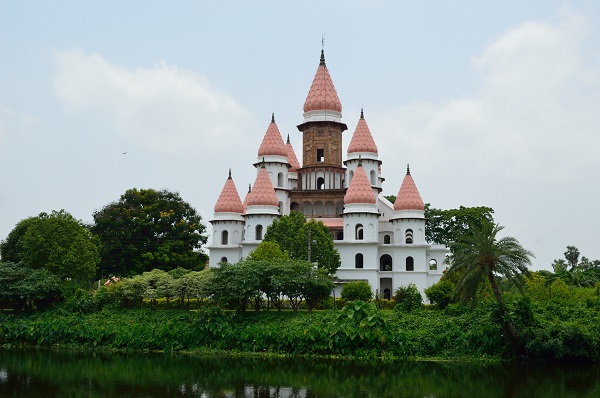 Pandua Bari mosque was constructed in 1300AD having the dimensions of 7041m × 12.8m. The mosque has three aisles with 24 doors for entrance. There are 21 doors in front and three on side. Along with it, there are 63 domes on the roof which are situated over brick arches. The arches rest on stone pillars which depicts the influence of Hindu architecture. 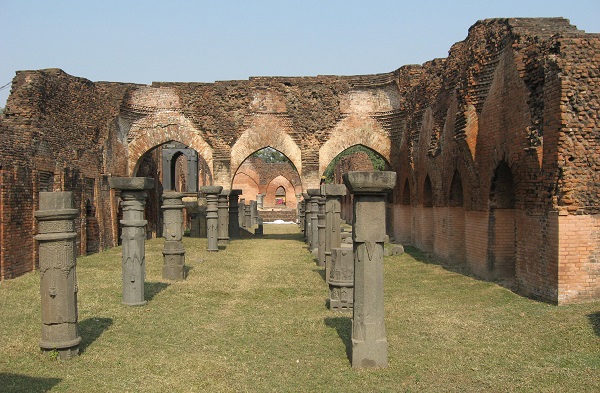 Shanderswartala Temple is located at the distance of 5km from Chinsura railway station and is considered as the oldest temple. Sideshwar Roy Choudhury constructed the temple on the banks of river Ganga. The temple is dedicated to Lord Shiva whose ilnga was placed by Digambar Haldar in 16th century.