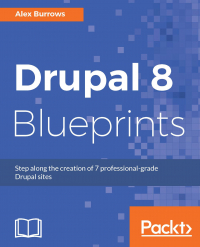 He has worked with Drupal since 2008 and has worked on some well-known brands and large-scale projects; he is also very active within the Drupal community and attends every European and North American Drupalcon, where he is a mentor as well.

He is also one of the directors of Drupalcamp London CIC, which has been running since 2013, and he has been involved in the organization and its running since the beginning. Each year, it is becoming a bigger, better, and more popular event, and it has been marked as the second biggest Drupalcamp in the world.