Predicting the next in a given input sequence is another important concept in machine learning. This chapter gives you a detailed explanation about analyzing time series data.

Sequence analysis or time series analysis is to predict the next in a given input sequence based on the previously observed. The prediction can be of anything that may come next: a symbol, a number, next day weather, next term in speech etc. Sequence analysis can be very handy in applications such as stock market analysis, weather forecasting, and product recommendations.

Consider the following example to understand sequence prediction. Here A,B,C,D are the given values and you have to predict the value E using a Sequence Prediction Model.

Pandas is an open source BSD-licensed library which provides high-performance, ease of data structure usage and data analysis tools for Python. You can install Pandas with the help of the following command −

It is an open source BSD-licensed library which consists of simple algorithms and models to learn Hidden Markov Models(HMM) in Python. You can install it with the help of the following command −

It is a structured learning and prediction library. Learning algorithms implemented in PyStruct have names such as conditional random fields(CRF), Maximum-Margin Markov Random Networks (M3N) or structural support vector machines. You can install it with the help of the following command −

It is used for convex optimization based on Python programming language. It is also a free software package. You can install it with the help of following command −

Pandas is a very useful tool if you have to work with time series data. With the help of Pandas, you can perform the following −

The following example shows you handling and slicing the time series data by using Pandas. Note that here we are using the Monthly Arctic Oscillation data, which can be downloaded from monthly.ao.index.b50.current.ascii and can be converted to text format for our use.

For handling time series data, you will have to perform the following steps −

Next, define a function which will read the data from the input file, as shown in the code given below −

Now, convert this data to time series. For this, create the range of dates of our time series. In this example, we keep one month as frequency of data. Our file is having the data which starts from January 1950.

In this step, we create the time series data with the help of Pandas Series, as shown below −

Enter the path of the input file as shown here −

Now, convert the column to timeseries format, as shown here −

Finally, plot and visualize the data, using the commands shown −

You will observe the plots as shown in the following images − 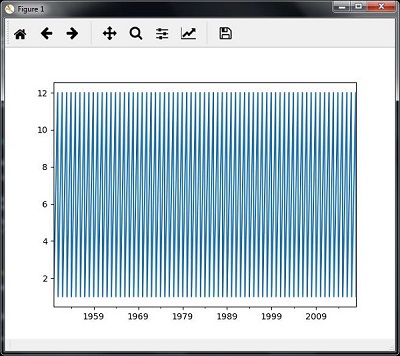 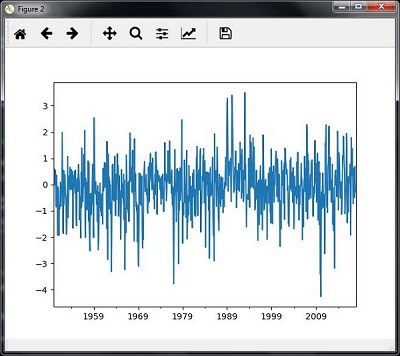 Slicing involves retrieving only some part of the time series data. As a part of the example, we are slicing the data only from 1980 to 1990. Observe the following code that performs this task −

When you run the code for slicing the time series data, you can observe the following graph as shown in the image here − 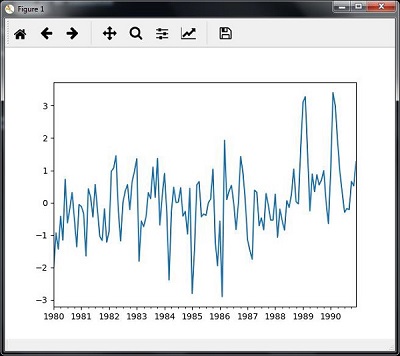 You can use the mean() function, for finding the mean, as shown here −

You can use the max() function, for finding maximum, as shown here −

You can use the min() function, for finding minimum, as shown here −

Getting everything at once

If you want to calculate all statistics at a time, you can use the describe() function as shown here −

You can resample the data to a different time frequency. The two parameters for performing re-sampling are −

You can use the following code to resample the data with the mean()method, which is the default method −

Then, you can observe the following graph as the output of resampling using mean() − 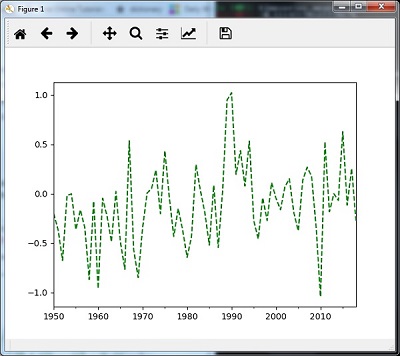 Then, you can observe the following graph as the output of re-sampling with median() − 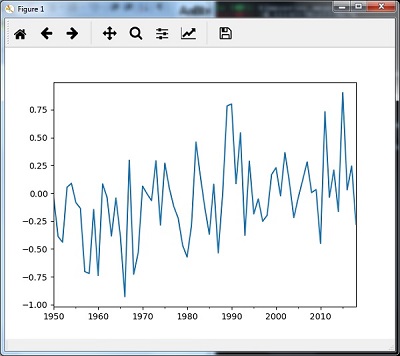 Then, you can observe the following graph as the output of the rolling (moving) mean − 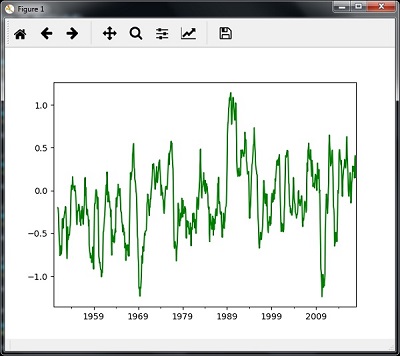 HMM is a statistic model which is widely used for data having continuation and extensibility such as time series stock market analysis, health checkup, and speech recognition. This section deals in detail with analyzing sequential data using Hidden Markov Model (HMM).

HMM is a stochastic model which is built upon the concept of Markov chain based on the assumption that probability of future stats depends only on the current process state rather any state that preceded it. For example, when tossing a coin, we cannot say that the result of the fifth toss will be a head. This is because a coin does not have any memory and the next result does not depend on the previous result.

It is a set of hidden or latent states present in a HMM. It is denoted by S.

It is a set of possible output symbols present in a HMM. It is denoted by O.

It is the probability of making transition from one state to each of the other states. It is denoted by A.

It is the probability of emitting/observing a symbol at a particular state. It is denoted by B.

It is the probability of starting at a particular state from various states of the system. It is denoted by Π.

In this example, we are going to analyze the data of stock market, step by step, to get an idea about how the HMM works with sequential or time series data. Please note that we are implementing this example in Python.

Import the necessary packages as shown below −

Now, use the stock market data from the matpotlib.finance package, as shown here −

Load the data from a start date and end date, i.e., between two specific dates as shown here −

In this step, we will extract the closing quotes every day. For this, use the following command −

Now, we will extract the volume of shares traded every day. For this, use the following command −

In this step, create and train the Gaussian HMM. For this, use the following code −

Finally, in this step, we plot and visualize the difference percentage and volume of shares traded as output in the form of graph.

Use the following code to plot and visualize the difference percentages −